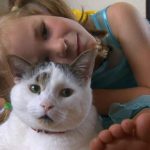 A man and his cat lost their home when their yacht sunk Friday and the pair were reunited thanks to help from the maritime authority and a nearby ship. Australian Maritime Safety Authority - AMSA told of Major Tom's rescue and how he was reunited with his petdad, writing at Facebook: AMSA is very pleased to report that Grant McDonald, who was rescued off the West … END_OF_DOCUMENT_TOKEN_TO_BE_REPLACED Charlie was just a kitten when he went missing three years ago. His family was astounded and overjoyed when they learned recently that he had been found and was coming back home to them. When Charlie suddenly disappeared without a trace from his home in Craigeburn, Australia, a suburb of Melbourne, petmom Suzanne thought he must have been hit by a car. Suzanne … END_OF_DOCUMENT_TOKEN_TO_BE_REPLACED A blind and deaf 12 year old indoor cat who went missing three weeks ago is safely back home. Ellie had been living in a man's garden in the Brooklands area of Leighton Buzzard, in Bedfordshire, UK for a few weeks after getting out of the house and going missing.  She was picked up from a middle school's playing field on June 1 and taken to the Heath and Reach Veterinary … END_OF_DOCUMENT_TOKEN_TO_BE_REPLACED