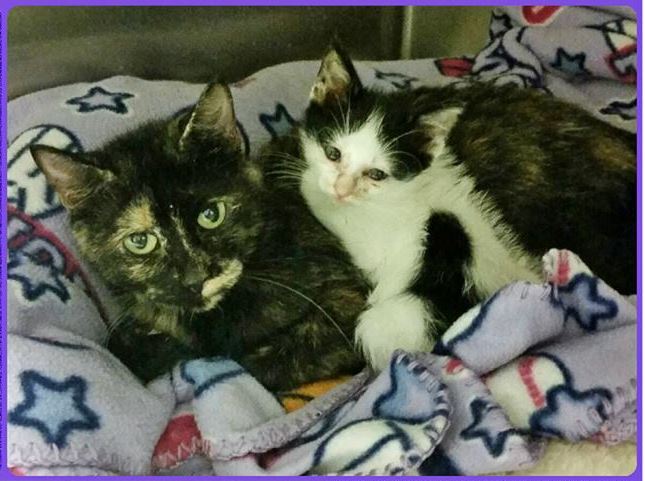 A Nebraska rescue group pulled a mama cat and her kitten from the shelter and that set of  chain of events that brought the pair back with the family who lost mama over a year ago.

Fur the Love of Paws, located in North Platte, got the mama cat and her kitten from the shelter and named them Jane and Tarzan. They let prospective adopters know the pair were available but were closely bonded and needed to remain together. Jane and Tarzan went into foster care and touched the hearts of their rescuers and Facebook followers.

There was a health scare for Jane when a tumor was found in her mouth and removed. Fortunately, it was found not to be cancerous and was from stomatitis instead.

Fur the Love of Paws did not just rescue mama and her kitten, ensure their safety, give them love and care and keep them together. They got them back to mama’s family, from whom she’d gone missing more than a year ago.

Jane, whose name is Princess, went missing from her North Platte home with Debbie and Beth Fields, who had to give up hope of ever seeing her again when they moved to Washington state.

It was through the power and reach of social media that they found her again, in the care of the rescue group.

Debbie and Beth traveled from Washington to North Platte to reclaim Princess this week, and to take both kitties back to their new home.

“I was completely shocked and amazed I couldn’t believe what I was seeing,” Debbie told 10/11 News.

Debbie and Beth contacted Jenn Porter-Milne with the rescue and told her that Jane was Princess. Jane figured that with many tortie cats having a similar appearance, the Fields might be mistaken, but when they sent photos, her identity was confirmed.

“I guess it makes me feel absolutely overwhelmed and elated,” Jenn said. We pull from the shelter and rescue based on our heart. If an animal speaks to us we rescue them and a lot of times they’ve been faith pulls.”

“I’m at a loss of words because I expected not to see her again,” Beth said when she was reunited with Princess on Tuesday.

“This is something that rejuvenates us and it’s refreshing we are here for a purpose and this is our purpose to rescue and to give them the life they deserve,” said Jenn.

Fur the Love of PAWS told the reunion story at Facebook on August 29, writing:  About a week and a half ago we received a call from a woman in Washington. A year ago her cat got out and 6 months ago, the family moved to Washington. They’d had this cat all her life and were still devastated by the loss of their “Princess.” They were 110% sure Jane was their Princess!

At first, I was skeptical. Torti’s are a mash of black and oranges, and often times look similar. The family insisted Jane was their little girl that had gotten out of the house and was never found. They looked and looked, but she was a very timid and shy cat, and thye assumed the worst after time went on…. and then they had to move, semi accepting the fact that their cat of 7 years was gone forever…..

I asked for a picture, and when they sent one, it was like a dream. (See big middle picture on collage) Their Princess is OUR Jane! We have been speaking with them for a week and a half and since the first minute of the first conversation, they were willing to do anything to get their Princess back, to have her as a part of the family again. Including accepting little Tarzan… even though he has a little hiccup with his health. Including driving from Washington to North Platte, a 24 hour trip. Including jumping through a couple ‘rescue hoops’ that are created to ensure forever homes for our rescues. The family is thrilled and so are we…. it’s yet another Miracle for this rescue.

Why did we choose to pull Jane and her little one? What drew us to them out of all the others? I tell the story all the time, that when I met Jane, I didn’t know there was a Tarzan. Jane was up in a litter box cove and he was so tiny and hiding in the lower corner of the enclosure. Jane and I clicked that first second, and without a doubt – this is why. This rescue is blessed in so many ways, our lives are continuously placed on a path that we cannot possibly explain. Princess/Jane’s family doesn’t even know who Fur the Love of PAWS . They’ve never heard of us, and don’t know about our fb page. Some how, some way, Jane & Tarzan’s story popped into their feed, and they happened to see it. They then lost it and spent a lot of time trying to figure out where she was and how to find her. All of these things, are unexplainable and amazing and remind us there is a much Higher Power here, leading this rescue and leading our efforts. This is just another reminder of that.

Fur the Love of PAWS added at Facebook Tuesday:  It’s been an absolute whirlwind with lots of ups and downs – but today – PRINCESS AND TARZAN ARE GOING HOME! They are now on a 24 hour drive back to Washington… with their long lost family member, and a sweet new little addition.

Watch the 10/11 North Platte News report on the story: 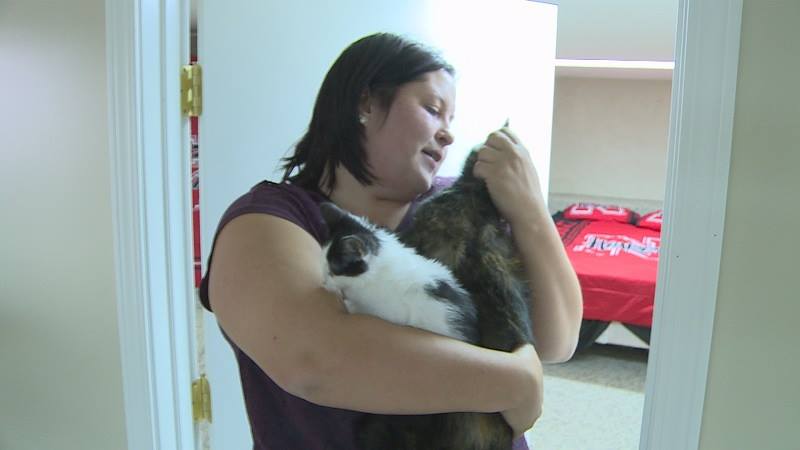 A post about the rescued mama cat and her kitten by Fur the Love of Paws on August 18 that accompanies the photo below read: Jane & Tarzan showed up as strays at the city shelter. Tarzan started to get a little ill, and after seeing how much they love each other, we decided to pull them, vet them and help them find a forever home TOGETHER!

We are placing these two up for adoption much sooner than we intended. We were going to put these little treasures into a foster home, but things have changed and an immediate adoption is the better route to take!
Little Tarzan is overcoming an upper respiratory infection but doing really, really well. Mama Jane was spayed on Monday and is healing nicely, but it is primarily these two reasons that we’d love to pound pavement and really find them their forever home quickly.

Jane and Tarzan are a bonded BFF mother/son duo and will be adopted out as such.

Jane is a spayed female, Tortoiseshell Calico. She is litter trained and good with kids and dogs, but because she’s been a stray, she will need a little time to settle in. She is fully vaccinated including rabies, has been dewormed and is on flea/tick/heartworm prevention. Jane has had a rough go at life, as evidenced by her poor uterus upon her spay on Monday. She has had many litters and is estimated to be about 5 years old. Being unspayed for 5 years, Jane alone could have produced 60 kittens, each of those kittens could have had 6 kittens two times in a year…. so you see the point here. WOW. Poor Jane. The good news is, she is now spayed and gets to live a life of luxury with her new forever family, as soon as we find them. She is very happy that she finally gets to keep one of her babies and live in safety and security forever with him.

Tarzan is about 6 weeks old and normally we would never adopt out a kitten this young, but since he is eating canned/hard food and staying with his mama, it will be just fine. Tarzan has been given his first vaccine and will need a booster in a month. His booster and his neuter are both covered by the rescue. He will need to be neutered by the age of 6 months, and we will have you bring him to our vet to do that. Tarzan has been dewormed and is flea and tick free. He is currently on antibiotics for his upper respiratory infection and those will need to be continued until finished, but he is a trooper about it! Tarzan is using the litter box and will be good with dogs and kids. He is a little under socialized right now, but likes to be held and will adjust to the home life quickly. Tarzan does have a rarer strain of upper respiratory infection known as Calicivirus, so it is best if these two are in a home with no other cats… which is ok since two is the purrfect number!

We know that not many people are looking for a duo, but we are hoping you can help us find their home. You will never find a more thankful pair. They are very quiet and clean, they want and ask for nothing more than a little affection and love. Once they feel safe and secure in their home, they are going to give so much love and friendship, and laughter, in return. 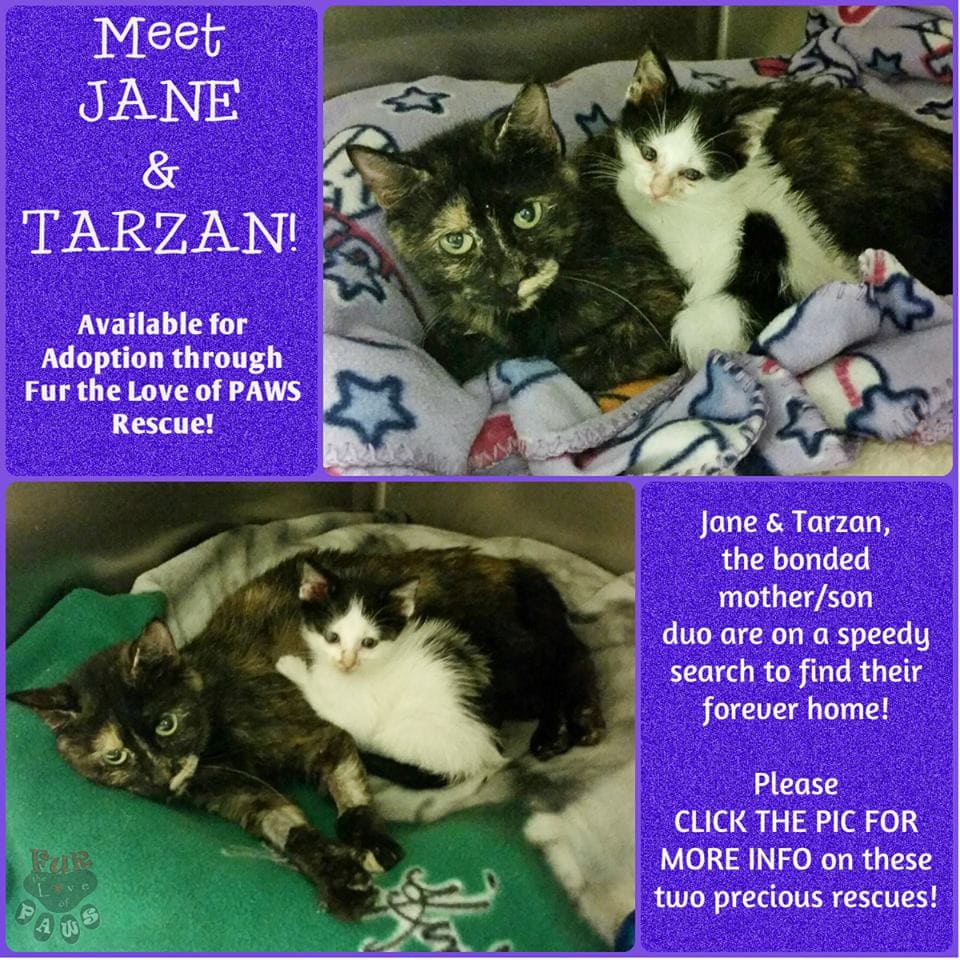 Princess Jane and Tarzan are off on their new journey to Elma, Washington! It’s been an extremely emotional day, so kind…