This kitten is being pampered by his rescuers. But whoever opened a car door and dumped him on the street is in trouble if police catch up with them. This kitten was tossed out of a car, abandoned and left crying on the street, according to a report in the Brockton Enterprise. Witnesses saw a green car come to sudden stop on a city street in Brockton, Massachusetts before … END_OF_DOCUMENT_TOKEN_TO_BE_REPLACED Po, the cat, was a fighter, but given the trauma his poor body endured, he traveled to the Rainbow Bridge earlier this month.  Found at the Harrison Cemetery in Ft. Worth, he had been critically burned and stabbed when rescuers came across him as they responded to an emergency call.  It appeared his injuries may have been done as some sort of ritual, given the evidence that had … END_OF_DOCUMENT_TOKEN_TO_BE_REPLACED 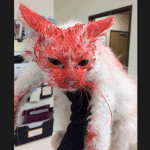 A Michigan man who spray painted a kitten's face and pled guilty to animal torture has been sentenced to nine months in jail, according to a report by mlive.com of Grand Rapids, Michigan. The kitten, named Murphy, required extensive care and surgery to recover from the abuse. His tail had so many broken bones that it had to be amputated. The offender, Paul Wicker, 40, … END_OF_DOCUMENT_TOKEN_TO_BE_REPLACED 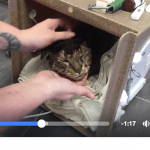 Po the cat is stable, purring and eating cat food, according to the dedicated care givers at Animal Hope Pet Adoptions in Forth Worth. The one-year-old male tabby cat was burned and stabbed in what appears to have been a ritual carried out in a Ft. Worth cemetery where the cat was found and rescued. He's purring when rescue workers pet his head. "He's very, very sweet," … END_OF_DOCUMENT_TOKEN_TO_BE_REPLACED