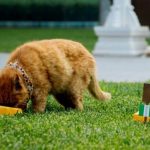 Known as the "psychic" cat in China, the famed orange tabby named  Baidian'er, the English translation being "white spot,"  that predicted correctly six World Cup games bracket winners, has passed away according to a posting on social media. Baidian'er was one of the famous feline residents of the Palace Museum in Beijing's Forbidden City. In celebration of the World … END_OF_DOCUMENT_TOKEN_TO_BE_REPLACED