. A beloved young cat missing for a year has been reunited with his family, thanks to a rescuer who spotted him sitting in a dangerous spot near a busy roadway. Jo White co-runs Paws n Claws Rescue in the area around Wigan and Warrington, UK. She recently helped Riley return to his family when she happened to spot him sitting on a path and took him home for a microchip … END_OF_DOCUMENT_TOKEN_TO_BE_REPLACED Freya is back home with her loving petmom again seven years after she disappeared, thanks to a shelter's TNR program and her microchip. Freya's happy reunion with Jan Cheeseman of  Shirebrook, Derbyshire, UK  took place in recent days after the long-missing cat was found living with a feral colony 24 miles from her home. Rain Rescue brought the reunion about … END_OF_DOCUMENT_TOKEN_TO_BE_REPLACED Conroe, Texas resident Linda Barry was not expecting the call she got recently from a microchip company telling her that her long lost cat Chloe had been found after eight years. Linda says the chip company asked if she was missing a cat. "I responded, 'What cat?' she told KTRK News, "And they said, 'Well, do you have a cat named Chloe?' And I said, 'Well, I did … END_OF_DOCUMENT_TOKEN_TO_BE_REPLACED A petmom's request for help made to a cat rescue group last week - combined with some luck and dovetailing circumstances -  resulted in her missing cat being returned home to her after nearly a year. Shelly Fairbrother and her family including cats Chelsea & Mojo moved from Poole, UK to Williams Close, Rowner, near Gosport, about 50 miles way, in August of … END_OF_DOCUMENT_TOKEN_TO_BE_REPLACED 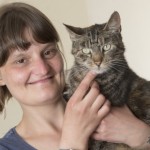 . A loving cat missing from her Manor Park, Sheffield, UK home for two years has been reunited with her petmom thanks to a shelter's feral cat TNR program. Staff at South Yorkshire animal charity Rain Rescue say it became clear early on that Roxie was no feral after she was trapped and brought in one day last week through the organization's Operation Feral program. She … END_OF_DOCUMENT_TOKEN_TO_BE_REPLACED