Tiny Toto, the Tornado Kitten, survived an F3 Tornado in central Massachusetts at the beginning of June, 2011. He was found and taken to the Brimfield Fire Station. Jonathan Hall, part of the EMS squad,  helped to care for Toto during day before he was taken to the Animal Rescue League of Boston facility. Though veterinarians determined he was only 2 to 3 weeks old when found, … END_OF_DOCUMENT_TOKEN_TO_BE_REPLACED 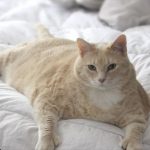 At 33 pounds, Bronson is a big kitty, but thanks to his new forever family, he is not only loved, he is on his way to losing weight His story is a bit of a mystery. “They guessed that his owner may have been an elderly person or immobile, so they weren’t able to give him exercise. They also guessed that he was either overfed or fed people food because he’s only 3 … END_OF_DOCUMENT_TOKEN_TO_BE_REPLACED If you happen to be flying through Charlotte, NC, between 9:00am - 11:00am on Wednesday, August 8, you may want to check out the atrium and get yourself a kitten cuddle or two. While stress dogs are seen more often these days in airports to help passengers relieve a little travel anxiety, officials at Charlotte-Douglas International Airport, are hoping kittens will … END_OF_DOCUMENT_TOKEN_TO_BE_REPLACED Meet Henrietta, a tiny kitten who was born with an extremely rare condition called polymelia resulting in an extra pair of legs - and can occur in humans and animals. Pat Dryden, a volunteer with Feline Friends Cat Rescue where Henrietta is housed, said, “We noticed she had twisted leg syndrome and we had to massage her legs constantly." “One day when we were … END_OF_DOCUMENT_TOKEN_TO_BE_REPLACED

Living Free Animal Sanctuary has had to relocate all of their animals as part of evacuation efforts during the Cranston fires in Southern California.  They need our help. Please share to get the word out for this wonderful organization that has rescued  and found homes for so many deserving animals.   Update on the dogs, cats and horses of the sanctuary Thanks … END_OF_DOCUMENT_TOKEN_TO_BE_REPLACED