The couple who played catch with two cats while babysitting and posted video to Facebook were sentenced Thursday over the incident. Kaine Fowler and Melissa Candela were babysitting two young children in Ashtabula, Ohio on Monday, February 16 when they captured the action on video as they played catch with the household’s two cats, folding them into rounded shapes … END_OF_DOCUMENT_TOKEN_TO_BE_REPLACED 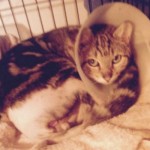 Two major US organizations are taking an interest in a terrible case of animal abuse in Texas that hurt two 8 month old kittens and led to the death of one of the two. Alley Cat Allies and HSUS are offering two substantial rewards totaling over $12,000 in the case of two mutilated kittens, one of which is recuperating after the pair were found and rescued in … END_OF_DOCUMENT_TOKEN_TO_BE_REPLACED 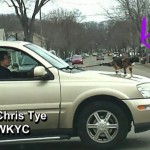 . Note: The second video report below begins on autostart. It can be paused until such time as you wish to view it. Fellow motorist Polly Vandall got photos on her phone when she spotted an SUV driving with a very unhappy looking cat leashed to the hood. Polly says everyone at the intersection where she snapped the photos was staring at the totally unexpected … END_OF_DOCUMENT_TOKEN_TO_BE_REPLACED 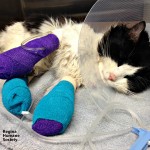 . Thousands of dollars and and many supportive good wishes have poured in for the young stray named Bruce Almighty, who is in the care of the Regina Humane Society in Saskatchewan, Canada after being found with electrical tape tightly bound arond his legs and paws. The tape had been in place long enough to cause Bruce considerable suffering and damage before he was found and … END_OF_DOCUMENT_TOKEN_TO_BE_REPLACED 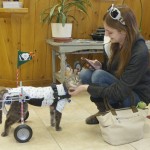 . A 10 year old special needs cat who became paralyzed when he was abused is getting around on his own set of wheels now, is a shelter mascot, and has found a loving home. Meet Emerson - if you have not already done so - the mascot of the Houlton Humane Society in Houlton, Maine. Emerson came to the shelter with multiple issues last year after suffering abuse at the hands … END_OF_DOCUMENT_TOKEN_TO_BE_REPLACED