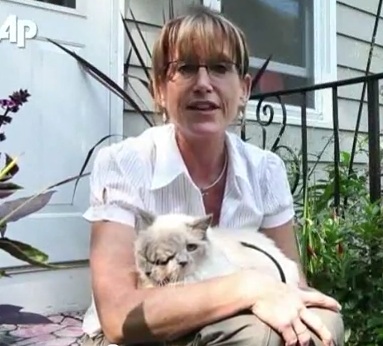 Normal housecat Frank and Louis and petmom Marty Stevens, of Worcester MA, are in the spotlight this week, as the phenomenally long lived two-faced Janus cat has made news as Guinness World Records declared him the longest living cat of his kind.

We posted a story on Monday, An At-Home Visit With Frank and Louis the Two-Faced Janus Cat, telling the unusual cat’s story and showing him at home with his mom as a local news outlet came to visit. This was not the first video feature on the famous cat, but as far as we know, it was the first to treat him respectfully and not like a freak.

The beautifully fluffy boy turned 12 on September 8 and shows no sign of slowing down; not so extraordinary for most cats, but Janus cats typically do not live beyond 1-4 days, according to Tufts Veterinary Hospital staffer, Dr. Armelle Delaforcade. The doctor noted the scepticism that met Marti’s decision to adopt the statistically unviable cat when he was brought to the hospital by a breeder to be put down at one day old, and says she and the hospital are now grateful that Marti had the open heart and willingness to take a chance on the little cat. Frank and Louis has defied and conquered the odds as no one thought possible.

Marti says she hopes Frank and Louis continues to defy the odds for a long time to come, while she feels that in light of them, every day is a gift.

Here is another wonderful and respectful visit with Marti and Frank and Louis at their home, with commentary by Tufts veterinary doctor Armelle Delaforcade. We enjoyed viewing this second piece on the unique yet ordinary cat and thought you would, too.

Note for those who may not have seen our earlier story: Frank and Louis sees from two eyes, like most of the rest of us, and the middle eye is not functional. He has to turn his head so both eyes can work together. He eats from one mouth only.

7 thoughts on “More on Frank and Louis, The Extraordinary Two-Faced Janus Cat Who Defied the Odds”