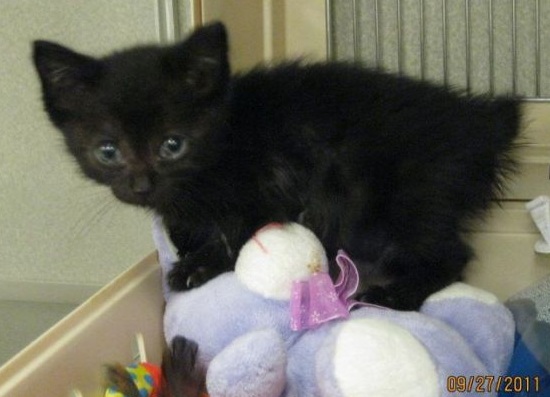 Tabitha was rescued from an Albany NY apartment complex dumpster on Monday by an eagle eyed maintenance man who found her after hearing her cries. It is not known what happened to the 4-6 week old kitten before she ended up in the trash, or how she got there, but the kitten was found crushed and wrapped in a plastic bag. A medical examination showed her to have 4 broken ribs, along with a damaged lung and possible pneumonia, which necessitates the oxygen chamber. 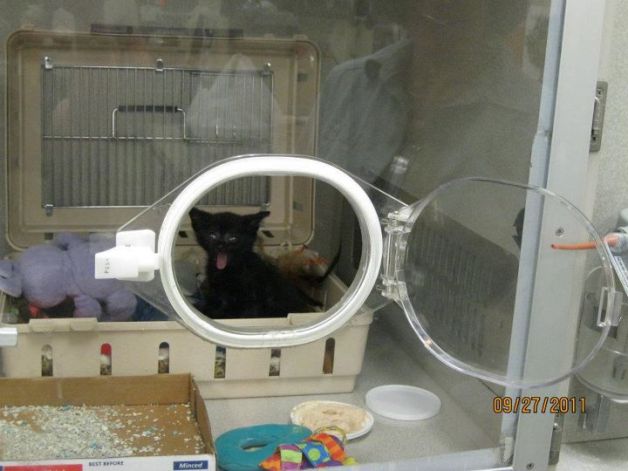 Tabitha was given over to area rescue group Orange Street Cats and is in the care of Capital District Animal Emergency Clinic and Upstate Veterinary Specialties. In addition to her other injuries, according to Upstate veterinary Specialists’ Dr. Looney says little Tabitha also suffered suffocation injury from being in the plastic bag.

We will not presume that Tabitha was purposely hurt; she may have been hit by a car or fallen. We do not, of course, condone her being put into the dumpster and are not making excuses for anyone, but want to note that the source of her injuries is not known

In the four days since she has been in care, Tabitha’s precarious condition has gone up and down a couple of times, it is still not known whether she will survive. Tabitha herself is trying to make it, and OSC and her doctors and medical support staff are all doing their best to give her every chance to recover. 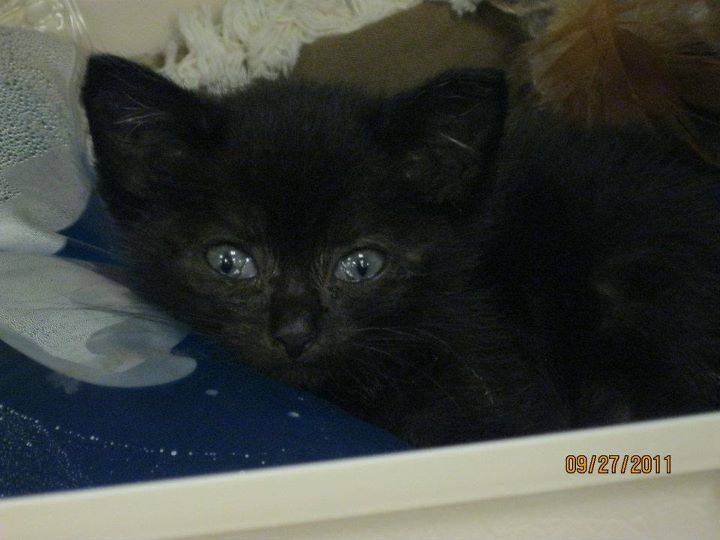 The following reports from OCS show the ups and downs of the kitten’s status, and also show her as a little girl with personality and playfulness.

We aren’t having a good morning. They tried to wean her off the oxygen and they got down to 30% from 40% (room air is 20%) and she couldn’t do it. She is struggling again. They need to look further at her chest with an ultrasound and see if the contused lung is too damaged to ever open up again. They are also going to be more aggressive today and insert an IV catheter and start her on IV antibiotics. Dr. Looney did say that a lobectomy (removal of a lobe of the lung) might be necessary at some point if it is too injured. They were a bit more aggressive with her treatment today, including a transfusion and lots of fluids. They are hoping to help her flush some of the injured lung tissue out of her right lung, which was nearly nonfunctional at the time of her ultrasound. But they have not given up hope that she can recover some the function at some point. They will try again over night to wean her off the oxygen and we are to call in the morning to see how that went, which will tell us a lot of what has to happen next.

She was in good spirits when we visited her tonight, getting so playful and silly with her IV line in her oxygen cage that she got out of breath and had to rest. 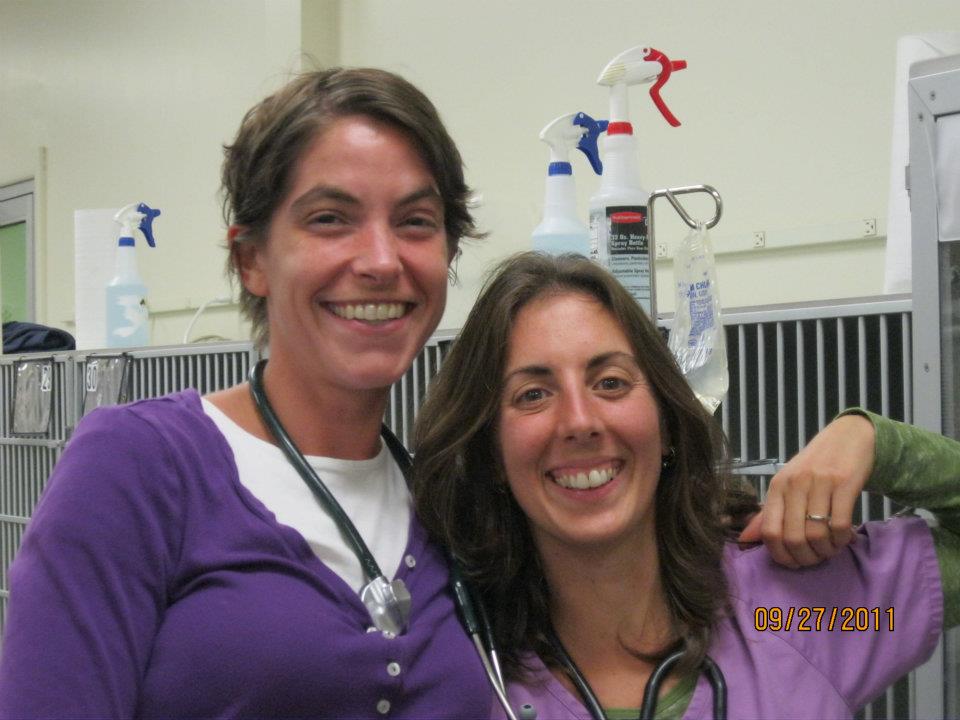 Dr. Tuffy and another CDAEC staffer

We talked with CDAEC staff early this morning, and Tabitha had a good night! They did not try to wean her from oxygen yet, but she ate like a little piggy and rested well and seems to be breathing a bit easier.

We spoke with Dr. Sedacca, the new attending, this morning.  He is pleased with how she looks. She is playful and interested in food. Her breathing is slightly better and she is maintaining her body temp without a fever. The plan is to try to wean her off oxygen and IV fluids.

Tabitha couldn’t handle room air, but is holding OK at 30% oxygen instead of 40%, so that is better. Her blood counts are holding steady after her transfusion, which is also good. They had to take her toys out since she’s still playing too much, the little wild thing! So all in all, better news.

The series of updates above takes to this afternoon, when Tabitha took a disappointing turn.

Sadly, while we were at the vet, Tabitha really tanked. They had to boost her back up to 40% oxygen, give her pain meds and do some other stuff I was trying not to watch. Dr. Sedacca plans some follow-up xrays and he’ll update us again later. Poor little one.

We hope to find a more positive development in Tabitha’s condition tomorrow, and to learn that she is getting stronger; her doctors are doing all they can for her.

The cost of Tabitha’s care is already mounting into the thousands of dollars.  Anyone who wishes to donate to help with her medical care can click here at the group’s website: Orange Street Cats . There is a donation button for those who like the convenience of donating with a few clicks, and instructions for those who wish to donate otherwise.

4 thoughts on “Tabitha Kitten Rescued from Dumpster, Fights to Recover in Oxygen Chamber”