We shared Corky’s story a week ago, shortly after Cats Cradle saved the kitten’s life and set out to improve his condition. After seeing specialists, he is scheduled for surgery to help straighten his legs.

Our post from March 22 Special Needs Kitty Corky Finds Caring Friends at CATS Cradle told how CATS Cradle Shelter of Fargo, ND recently took in a sweet and special little cat named Corky, who was born with twisted hind legs; saving his life and getting him help. 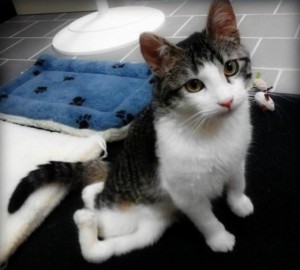 As the shelter tells it in an update on Corky today: “CATS Cradle Shelter has rescued a very special 7 month old kitten named “Corky” who has a congenital deformity called Bilateral Anthrogryposis.It is a condition that has caused him to have his hind legs backwards and crisscrossed. He is also a Bilateral Cryptorchid.

Corky is one of the sweetest, most loving cats we have every seen. He does not realize there is anything wrong with him. He gets around fairly well considering he drags his hind quarters behind him. He manages to get in and out of the litter box just fine, however he has to lay on his side to eliminate, and once he is finished he sometimes drags himself through the mess and ends up needing help to stay clean.

Corky went to meet a wonderful orthopedic surgeon named Dr. Dan Burchill and we are pleased to announce that Corky is scheduled for surgery on Thursday April 5th, 2012. He will have a long recovery ahead of him, but we are confident that Corky will heal up and have an entirely new lease on life.

He will never be able to jump, but he will be able to climb which is something he has never been able to do thus far. The surgery is estimated to cost $2,504.69 and that is not including the special braces he may need post op or any post op appointments he may need during his recovery time.”

Below is a news story from March 22, made the night of our earlier story, and before plans were made for Corky’s surgery. The video shows him getting around very readily despite his condition.

3 thoughts on “Corky Update:Special Needs Kitten With Twisted Legs Will Have Surgery”