CATS Cradle Shelter of Fargo, ND recently took in a sweet and special little cat named Corky, who was born with twisted hind legs and needs to drag himself along. Corky will get help to either straighten his legs or make sure he is otherwise comfortably able to get around. 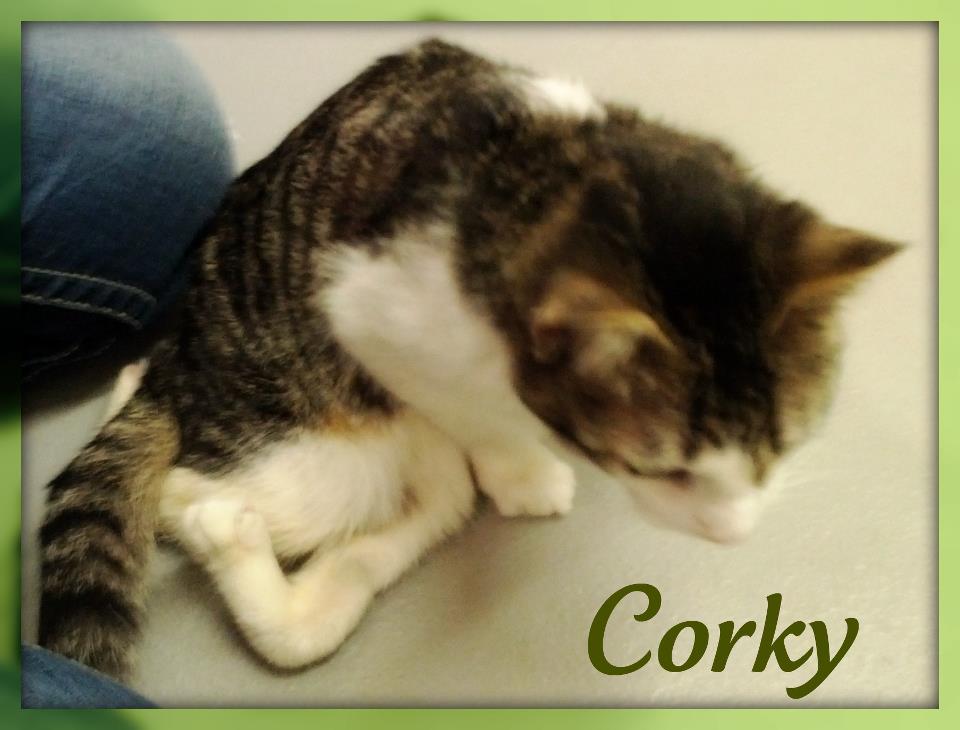 Corky is much like Willow, the specially abled kitty who has brought much attention and understanding to cats born with twisted hind legs. Like Willow, with her petmom Wendy Matthews, Corky has found people who care about him and want to help him live well with his condition and to make as much progress as possible toward being able to walk.

CATS Cradle volunteers took Corky in to save his life, knowing he would likely have been killed elsewhere.  He has endeared himself to shelter volunteers in the few short days they have known him, and as they’ve run through initial thoughts on how best to help him. Corky, named for his corkscrew twisted back limbs, is about 7 months old, and his legs are described as being backwards and crisscrossed and non-functional, though he has feeling in his toes. His new caregivers suspect he was kept confined for most of his short life. 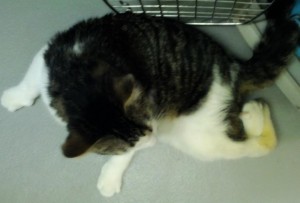 CATS Cradle first contemplated amputation as the best way to help the little cat who drags his hind legs behind him, and who cannot climb.  After learning about cats with his condition, they are considering trying to have his legs carefully straightened. They are also considering getting a kitty cart to hold up his back end so he doesn’t have to drag himself along the floor. CATS cradle says they will consult with the appropriate specialists before making a plan. 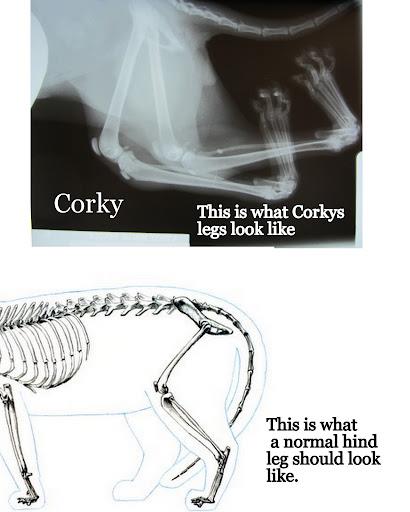 Image of Corky’s legs, compared to a normal cat. His caregivers made this comparison photo, and say:

“This is just one of several radiographs that were taken of Corky today. You can see the comparison to what a “normal” cats leg bones should look like. We will be getting more than one opinion from bone specialists about what the best options are for Corky. In the meantime, he is enjoying the comfort of the CATS Cradle Shelter, where he has homestead rights in the office…lots of soft bedding, food, water, toys and tons of love.”
CATS Cradle is accepting donations toward Corky’s medical care. Checks can be mailed to CATS Cradle Shelter at 9 – Ninth Street, Fargo, ND 58103. Online donationscan be made via PayPal at the Cats Cradle Donation Page, or at a similar donation page at Facebook.

Cats Cradle has an order in for Leggings for Life to make it easier and more comfortable for Corky to get around. Here is Willow demonstrating Leggings for Life and telling why they are useful for kitties such as Corky and Willow.

The CATS Cradle is a no-kill shelter for rescued cats and kittens. Its residents live in colonies of 6-10 cats in individual room units based on compatibility. They are cared for by a core group of shelter volunteers. Young kittens are frequently fostered in private homes where they get 24 hr care. Kittens do not reside in the shelter until they are at least 16 weeks of age, however they can be seen by potential adopters on Saturdays during an open house from 10am – 4pm when the foster parents bring them to the shelter for the day. CATS Cradle is currently funded 100% by donations and adoption fees. There is no paid staff at the shelter: everyone is a volunteer.