City the Kitty has starred in a Fresh Step commercial and his own videos. On Saturday, January 14, he hits the big time with Jackson Galaxy on My Cat From Hell. 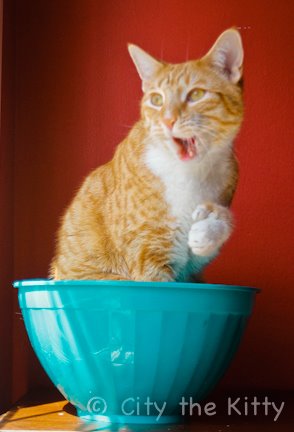 It’s the old, old story. Anonymous stray cat finds a loving home with a photographer, becomes a successful model, does some videos, gets a cat litter commercial, then ends up in celebrity rehab on TV.

That’s where we can all see City the Kitty next Saturday night, January 14, 2012, when he is the subject of a segment on Animal Planet’s My Cat From Hell with behaviorist Jackson Galaxy. According to City’s petmom Lori S., he’s really not her cat from hell, he just had a minor behavior problem involving a sibling.  Lori says Mr. Galaxy was able to help City to be a better behaved sibling. 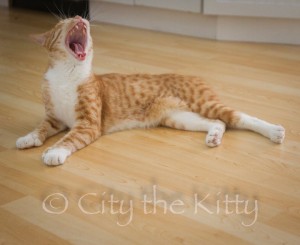 The handsome and exotic looking City is half Bengal, half Manx and “proudly polydactyl”. With his stub tail, he looks just a bit like a bobcat, too.

I got laid off from my job at a major newpaper in 2009 as a photographer and City showed up in front of my home about a month after that. He was dirty and hungry. He kept coming back for food and slept in my front porch area. After about 10 days I decided to let him in. He seemed right at home and was such a lovable and cute cat. I took pictures of him and made some flyers thinking that maybe someone would see them and come and get their lost cat. No one called and there were no signs of a lost cat in the neighborhood. We took him to the vet to see if he had a chip, but nothing.

We noticed he had an interesting tail, kind of a club tail and club paws. We thought of calling him CT for clubtail and clubtoes but that didn’t sound easy to say. So we thought, how about City! That’s how he was named City the Kitty! 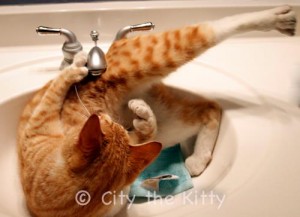 I started taking more pics of him since he was such a character and noticed that he seemed to enjoy it. I wanted to find a nice home for him since I already had a cat, Missy, so we started asking around if anyone wanted a cat. But soon, about a couple days later, we fell in love with him.

His energy was different. His actions were on the verge of being like a wild animal. His curiosity was the most I’ve ever seen in a cat. The love he expressed to us was so deep and tried and true we didn’t want to let him go.

I started posting some pics of him on my Facebook page and they were a hit. People loved him and wanted more. So I created a City the Kitty fanpage and it just kept growing by word of mouth.

For almost 2 years he was free to roam about the neighborhood. He would leave in the morning and come home for dinner and stay inside. Little by little we were getting word that he almost got hit by a car, the plumber almost drove off with him in his truck, a garage door almost squished him. It was apparent that he had used up 8 of his 9 lives and we didn’t want to risk that happening.

So….we kept him inside. He hated it and was so jealous of his sister, Missy, for her being able to be outside. So we started taking him on daily walks. It helped since he got to explore the neighborhood and smells from the other cats. 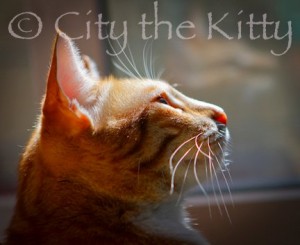 So here we are, 2 1/2 yrs later with over 4000 fans on his Fb page and thousands of photos. He gets requests from cat product companies to try out their products. He’s featured in the Fresh Step commercial. He and his sister are going to be on the Animal Planets, My Cat from Hell Show , on Jan 14th.

It’s not as bad as it sounds but yes, he has some behavior issues. He attacks Missy when she comes in to the house because he’s jealous. He sometimes would jump up and bite Shanna, his other mom, when she would pick him up and put him down. So this is why he’s on that show with us.

We hope that someday when City gets super famous we can donate a lot of money from his fame to shelters to help other little animals. That’s our goal. And to possibly build a shelter for homeless animals in the name of City the Kitty.

City the Kitty, speaking in his own voice, through his typist and secretary, Lori, says of himself at his Facebook page:
When I’m not napping, I like to drink from the sink, recline on my armchair, play with my sister, Missy, chase that stupid red dot that keeps showing up and moving around all over the room, and gossip with my girls. I enjoy watching people in the shower. I love playing outside but I don’t get to go out as much as I used to and only when I’m on a leash. My girls think that I’m too trusting of strangers and they say I used up 8 of my 9 lives when I got to roam free.
I used to like to wrestle my sister Missy when she came in the house and jump up on my girl to let her know who’s in charge. Jackson taught them the right way to act with me and now I’m a real good boy!

Thus, according to City, Jackson Galaxy taught the others how to amend their behavior in order to make City into a good boy. We’ll all see how things really went down when the program airs.

3 thoughts on “City the Kitty in the spotlight”