Thanks to a good Samaritan, a rescue group and a local vet, Westport, CT tuxedo kitten Bandit is saved. 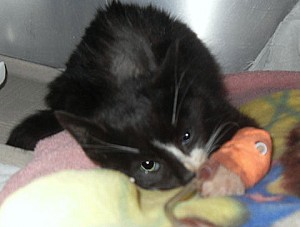 Tiny Bandit was found meowing and limping in a back yard in Westport Connecticut on January 2. The person who spotted him called local rescue group The Alliance in Limiting Strays, or T.A.I.L.S and a volunteer went to retrieve him. Bandit is thought to have been hit by a car and then left for dead. He was in very poor shape, with a badly injured leg which had become infected.

Bandit was teken to the Westport Animal hospital where x-rays showed that the leg needed to be removed. Though it was not certain that Bandit would even survive the surgery, his rescuers and doctors decided to give him a chance at life and recovery. The little cat came through the operation and is expected to recover. After further recuperation he will go to foster care and then, hopefully, to a forever home.

The organization now must raise money to pay for his medical bills but they know they did the right thing in giving the tiny kitten another chance at life.

Articles in the local papers will likely help bring in donations to T.A.I.L.S. so they can pay for Bandit’s care and continue their good work helping to humanely control the population of homeless feral and and stray cats in Southwestern Connecticut.

1 thought on “Bandit is saved: Tiny kitten hit by a car and left for dead recovers”