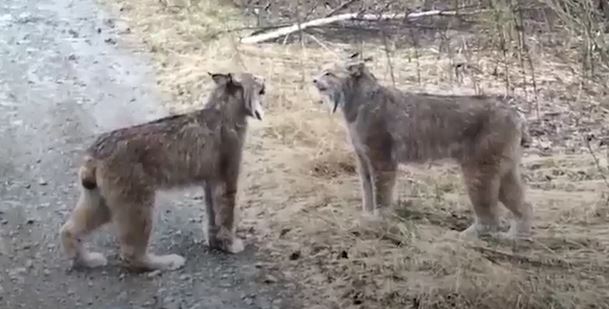 When a man, his girlfriend, and daughter traveled along a logging road in Ontario, Canada, they had no idea they would stumble upon a pair of lynx having a rather pointed, shall we say, conversation. Appears they were not at all bothered by the human voyeurs, but it does give one pause to wonder what the fray was all about.

“People were saying online, ‘well it sounded like it was dubbed,’ but that’s what they actually sound like,” Edward Trist told Global News Canada. “It’s almost comical if you watch it. It sounds like a couple kids narrating in the background but it was all live and we caught it.”

“I think the most bizarre thing of it is the audio, the sounds they made. I’ve heard similar sounds, but just the action of the headbutting … it just really caught me off guard.”