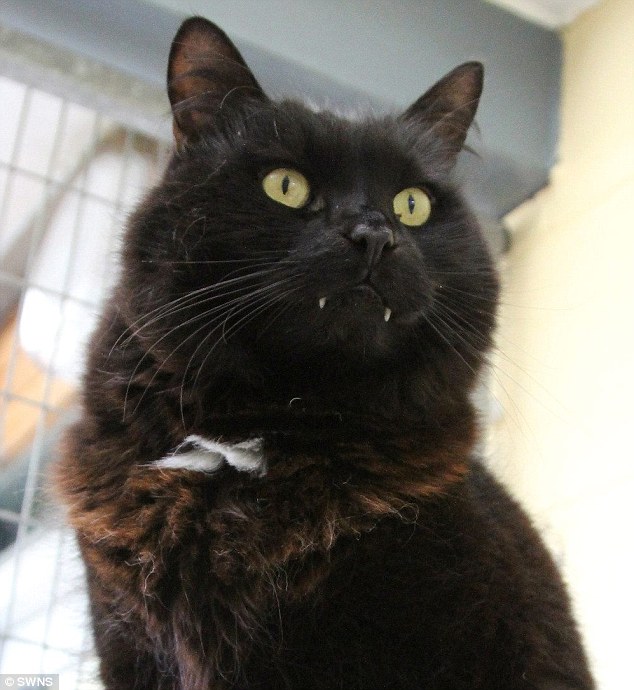 A ‘vampire’ cat has finally found a happy home despite his Dracula image say shelter staff, who were very pleased to announce sweet Timmy the cat’s rehoming this week.

At 9 years old, with black fur and downward protruding fangs, Timmy seemed to have everything going against him in a world where kittens are the first to get homes and black cats are typically the last to be adopted. His abnormal teeth were not helping matters any, either, as Timmy languished at the Blue Cross rehoming centre in Lewknor, UK for over 100 days as staff worried that his pointy teeth were putting potential owners off from taking him home.

Of course, what is off-putting to some is endearing to others.

“His unusual appearance has meant that Timmy has had a lot of interest in the past, however he hasn’t had much luck at finding his forever home,” Lisa said.

Poor Timmy, as sweet as can be, handsome, and fluffy, had already been returned to Blue Cross a total of four times through no fault of his own, and faced a lonely existence.

Black cats are notoriously difficult to rehome thanks in part to the old myth and superstition that they bring bad luck and in part to their coloring being perceived as drab in contrast to the gingers, torties, tabbies and others.

Lisa added: “The only supernatural powers Timmy possesses are ones of unconditional love and affection, just like any other cat.”

Timmy’s friends at the rehoming centre are delighted that he has finally found a good home with Ann Drummond.

“Despite the similarity to the vampire villain, Timmy is a friendly chap and we’re delighted that he has become part of a family again,” said Lisa.

Timmy’s new petmom Ann said: “We saw him on the Blue Cross website and thought he looked and sounded great.

“His fangs didn’t put us off at all – he’s the sweetest, friendliest cat.

“Our previous cat had one fang so he reminded us of her. Timmy’s such a character and we love him to bits.”

“Luckily his wait paid off and he’s found a great family who adore him,” said Nicola Rixson from the Lewknor centre. 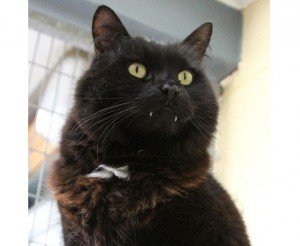