When her two-year-old black cat went missing from Readsboro, Vermont, his owner, Fran Hendricks, never could have prepared herself for the call she would receive alerting her that her cat had been found - on Martha's Vineyard in Massachusetts. Hendricks had only had the black cat for a few weeks when he escaped through an unlatched dog door. She had adopted the black cat in … END_OF_DOCUMENT_TOKEN_TO_BE_REPLACED 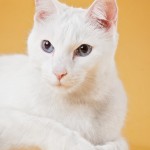 Dispatches From the Adoption Floor chronicles one volunteer’s work with her local shelter and the role it has played in healing the wounds of losing her own pets to an apartment fire. … END_OF_DOCUMENT_TOKEN_TO_BE_REPLACED