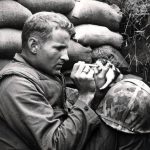 This beautiful photograph touches on the love war correspondent Frank Praytor had for animals. In his role as a combat correspondent for the 1st Marine Division in Korea, having begun his journalistic career in 1947,  he was on the front lines when he found and cared for the tiny orphan kitten. The Associated Press picked up the photo and it was subsequently published in over … END_OF_DOCUMENT_TOKEN_TO_BE_REPLACED