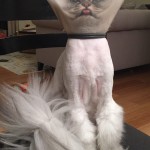 A Persian cat named Albert is now internet-famous, thanks to his hilarious reaction to being made to wear the infamous "cone of shame." Albert had a minor surgery - a cyst removal - which necessitated that his body was shaved. It also meant that he would have to wear an e-collar to keep him from pulling out his stitches. His owner, Jean Baker of Portland, Oregon, captured … END_OF_DOCUMENT_TOKEN_TO_BE_REPLACED What do you think is going through Kodi's mind? Do you think he doesn't recognize himself or maybe he just doesn't like his new look? The vet recommended keeping him and Shorty separate at first and you can hear Shorty meowing in the next room. … END_OF_DOCUMENT_TOKEN_TO_BE_REPLACED