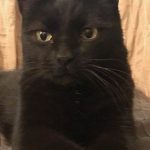 When Jon Gulla was away at college, one of the worst things possible happened.  His cat, Julie, went missing. Rescued with her brother Jon Gulla rescued Julie, a beautiful black cat, and her brother, Jack.  When he went off to college, his mom, Lorinda Roberts, became caretaker. Then, in 2012, Julie disappeared. “She just ran, and I couldn’t find her,” Roberts … END_OF_DOCUMENT_TOKEN_TO_BE_REPLACED