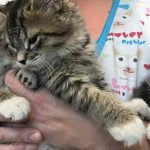 Three little kittens, born without eyelids, were found abandoned in September. Now they have received a special surgery to save their sight. A trio in danger of losing their sight "Marie," "Berlioz" and "Toulouse," were initially taken to Randolph Animal Hospital where they were diagnosed with eyelid agenesi. The disease is a rare congenital condition. Staff members … END_OF_DOCUMENT_TOKEN_TO_BE_REPLACED 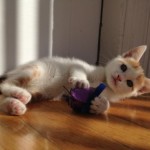 . BOSTON, March 12, 2015– A homeless kitten found in the Dorchester section of Boston, Mass. with his front paws frozen to the metal wire of a neighborhood fence is on the mend and will soon be placed for adoption, the MSPCA-Angell ( Massachusetts Society for the Prevention of Cruelty to Animals–Angell Animal Medical Center) announced today. A good Samaritan, who heard … END_OF_DOCUMENT_TOKEN_TO_BE_REPLACED 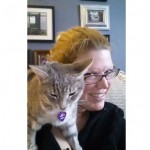 . A kitten in need of life-saving surgery when he was rescued last month after being found tethered to the wall of his home by a shoelace has overcome the odds and recovered, and has found a loving forever home with his foster caregiver. MSPCA (Massachusetts Society for the Prevention of Cruelty to Animals)-Nevins Farm and Angell Animal Medical Center staff weren't sure … END_OF_DOCUMENT_TOKEN_TO_BE_REPLACED 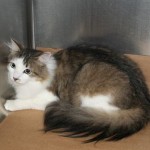 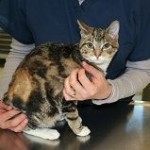 Bernadette was found in a cardboard box left outside of the MSPCA in Boston on March 18. Fortunately, the burns to 60% of her body were not severe, she has responded to treatment, and she is ready to be adopted into a good home. … END_OF_DOCUMENT_TOKEN_TO_BE_REPLACED