A woman petsitting her daughter’s new cat says the kitty saved her life, along with the house, when fire broke out early Tuesday morning.

Angie Costello was asleep at her daughter’s semi-detached home in Stanfield, Stoke-on-Trent, Staffordshire, UK early yesterday morning when thick black smoke made its way to the bedroom from a fire that started in the attached home next door.

Angie’s daughter Chiara was away on holiday, as were the residents next door, leaving only Angie and Chiara’s new Persian cat Ted in the building.

As smoke filled the bedroom, Ted hopped up on the bed with Angie, meowing loudly and incessantly until Angie awoke and realized the house was one fire. Angie was able to run outside and call 999 (the UK equivalent of 911), thanks to Ted raising the alarm.

Firefighters arrived and put out the fire before the house was totally lost, and it was Chiara’s concern for her new kitty’s well being that had Angie on the premises to summon them. Ciara got Ted three weeks ago for her birthday and didn’t want him left alone.

Angie spoke about Ted and the fire, saying:”Chiara went away on holiday and asked me to stay and look after the cat because she had him for her 21st birthday three weeks ago and didn’t want him to be on his own.

“I nearly didn’t come because I thought it will be okay on its own but it is a good job I did.

“The neighbours whose house set on fire were also on holiday when it happened so if I wasn’t there then both of them would have burnt down.

“The whole house was filled with smoke.

“At first I thought there was a fire outside, but I couldn’t see anything.

“My eyes were stinging and my throat was getting sore.

“Chiara only got him three weeks ago and he’s already saved her mum’s life.

“He ran off after the fire but we found him a few hours later.

Angie, who lives in Stanley, said: “The fire brigade were brilliant. They were here for a couple of hours and kept checking on me to make sure I was okay. They remained calm and they kept me calm too.”

Chiara said: “We have only had him for a few weeks and this was supposed to be mum’s first night looking after him. I’m glad he was there looking after her. He is definitely in for a treat when he comes back.

“He ran off after the fire service arrived, but he was found alive and well and has been taken to the vets to check he is all right after inhaling the smoke.” 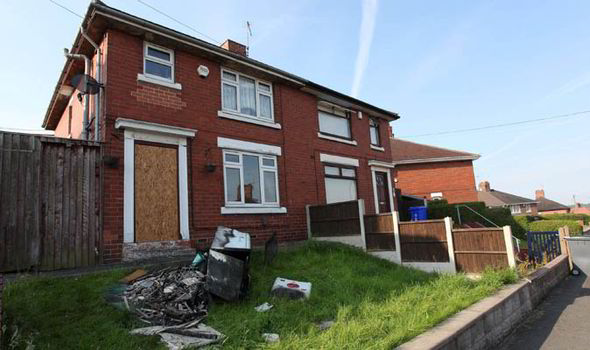