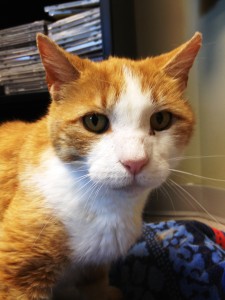 Tabby’s Place occasionally has the privilege of meeting a cat who qualifies as a medical miracle. Our mighty Morgan is such a cat.

A fata morgana is a form of superior mirage, resembling a sparkly strip of light above the horizon. Old-timey folks thought maybe it was a fairy castle, or a Flying Dutchman.

A cata Morgana is a form of superior feline, resembling a muscle-bound Mario with two “dead” hind legs. Veterinary folks thought maybe he was fixin’ to die.

“Impending death,” however, was just a mirage.

When we first met Morgan, he was unable to move his hind legs; his right hind leg had one speed: stop. The exact pre-Tabby’s Place details are unclear, but there was rain and thunder and an abandoned, dead-legged cat in a Morganville, PA garden. He was neutered and friendly — meaning clearly loved and willfully “lost” — but going nowhere fast. So, on an actual dark and stormy night, our creamsicle cat flew like a Dutchman to Dr. Fantastic.

The news was bad — ad as in, “Morgan has thrown a blood clot and is fixin’ to diiiiiiiie.”

Our team rushed him to the emergency veterinarian, where a cardiologist spoke the feared words: saddle thrombus. This terrifying blood clot’s calling card is hind-leg paralysis, and in Morgan’s case, it was due to serious heart disease.

This fearsome blood clot forms in the cat’s blood stream, working its way to the spot where this main artery branches out to supply blood to the hind limbs. The clot then cutting off blood supply to the cat’s back legs, causing paralysis. Even under the best circumstances, the affected cat’s prognosis is poor.

It’s estimated that 90% of saddle thrombus cases have underlying heart disease, and Morgan is no exception. Combine his immediate emergency with underlying severe hypertrophic cardiomyopathy (HCM); two forms of arrhythmias (irregular heart beat); and the beginnings of congestive heart failure, and Morgan would seem to have little hope of recovery.

Veterinarians agreed that Morgan had little hope of recovery. But Morgan never got that memo. Exuberantly friendly, Morgan is here to live and to love, and he isn’t taking no for an answer. 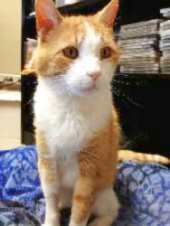 Not only did our gentle giant survive intensive care at the emergency hospital, but he proved himself to be a happy-go-lucky, gregarious snuggle bug at Tabby’s Place. So he retained some lingering weakness and “knuckling over” in his hind legs; so he needed a veritable pharmacy full of medications. No matter. Morgan is here to live and to love.. The creamsicle-colored cat with the cabbage-sized head is a sweetheart. During his Quarantine period, when visitors came to see another cat, he would reach through his cage bars, chattering and pawing at visitors in a scat giddiness.

But Morgan was breathing easy — and breathing out joy on everyone who approached him. Once again, we had a case of a cat who had seen the worst but was bent on being a blessing. So he’d been abandoned. So he’d been dealt an ugly hand. Life is about now, and Morgan is about life.

Morgan’s Quarantine cage just so happened to be under Sammy’s. When Sammy’s original rescuers came to visit her, Morgan hammed it up like the Will Ferrell of felinedom. He reached. He meowed. He heaved his hulking head (approximately the size of a blue-ribbon cabbage) into the cage, rubbyrubbyrubbing on the bars. He oozed love and joy and life.

There’s not a bitter bone in Morgan’s body — and that’s a good thing, too, since he’s approximately the size of the Netherlands and made of muscles. His cardiac condition is the only thing fragile about our solid boy.

We’re under no illusions that Morgan’s future is footloose and fancy free.  His condition is nothing short of dire, and every day his heart continues to beat is a gift and a victory.

Still, we can’t help but whisper in those giant whelks of his ears: Remember Sylvia. (Sylvia is alive 2 1/2 years after a similar diagnosis to Morgan’s.)

Diagnoses don’t have the final word, life does. And life wins.

Happily for him – and for our Founder & Executive Director – Morgan is now Jonathan’s feline office-mate. This gives him unparalleled access to the man at the heart of Tabby’s Place, and to a parade of doting visitors.

Now occupying the catbird’s seat as office mate to Jonathan, Morgan has a future featuring all the outstanding care he needs – and all the affection he craves. Although he’s still new to the Captain’s office, Morgan has already stolen Jonathan’s heart. 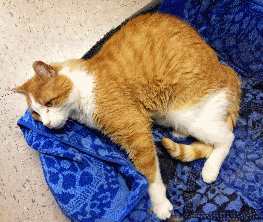 [On June 14] for the first time, I saw Morgan stretched out in his full glory. Gone was the fearful circle into which he’d curled those first few days, and long were those magnificent Morgan-legs, yawning forth in comfort and bliss. He’s reviewing the situation, just biding his time before he bursts out into full bloom.

But mark my words: bloom again he shall, and when he does, Morgan will only know one speed: life.

Morgan is the epitome of a Tabby’s Place cat: courageous, living well in the face of adversity, and above all, loved. We know that every day with Morgan is a gift, and we are grateful he made his way to Tabby’s Place.

Morgan’s heart gets help from a raft of medications, including an ACE inhibitor, a diuretic, a blood thinner, and a calcium sensitizer shown to improve survival time and quality of life for patients with congestive heart failure. To stay one step ahead of Morgan’s heart disease, we will give him an echocardiogram and chest radiographs every six months. Weekly laser therapy, although costly, will help Morgan to live a better life, creating positive blood flow to his weakened hind legs and easing his discomfort. If Morgan responds well to the laser, we may also introduce acupuncture.

Tabby’s Place is accepting sponsors for Morgan, people who contribute to help with the costs of his care. Those interested in sponsoring Morgan can donate to his care at the bottom of the special page that tells his story at the Tabby’s Place website, HERE.

Morgan’s story is told by Tabby’s Place Development Director Angela Townsend, who has kindly given us permission to share it here.  This story is comprised of excerpt from a blog post, the Tabby’s Place newsletter, and Morgan’s special needs profile page.

Tabby’s Place is a cage-free sanctuary that provides refuge to cats in hopeless situations. Their residents come primarily from public shelters where they had been scheduled for euthanasia.

This one-of-a-kind facility serves as:
An Adoption Center, finding loving homes for cats;
A Hospital, providing medical and surgical treatment for sick or injured residents;
A Hospice, providing palliative care and a warm, loving environment for chronically or terminally ill cats to live out their lives in comfort.

Tabby’s Place does not turn cats away due to age, medical need, or “lack of adoptability.” It is, therefore, a safe haven for several older, chronically ill, or handicapped cats. These cats have special needs such as heart disease, diabetes, cancer, or blindness. At Tabby’s Place, these cats are able to live full and happy lives with the medical care, love, and affection they deserve.