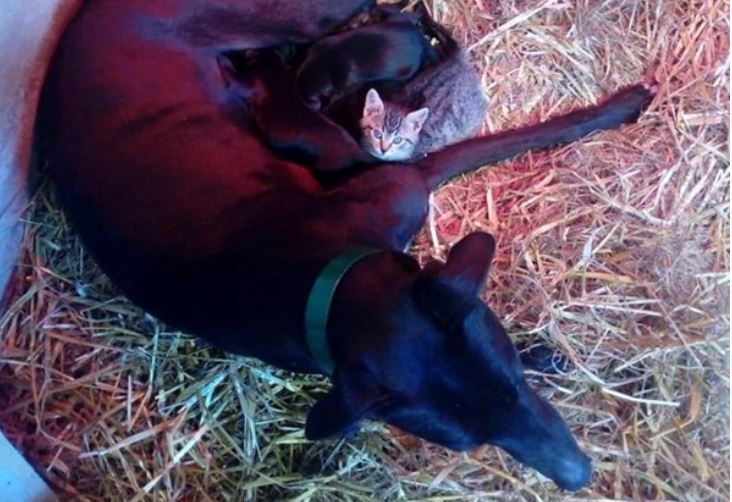 It wasn’t something the owner of a Greyhound was expecting to see when he went to check on her and her new litter. A tiny grey head that didn’t quite seem to belong. At least on first glance.

An addition to the litter

When Jim McCarty went out to check on the litter of newborn pups his Greyhound had delivered, he was a bit surprised to find the headcount was a bit off.

Turbine Tarbert had a healthy litter of six pups, but when he looked he had a little surprise.  Tucked in among the little greyhounds was a tiny tabby, making itself quite at home. McCarty has no idea how the furry little stray kitten found its way into the tiny pack. Or even when it came from, but it seemed to have found itself a home. The adorable photos that McCarty shared with Breaking News, confirm that fact.

There have been many accounts of dog moms taking in kittens or cat moms caring for puppies.  Only recently there was a story about a Corgi who adopted a kitten after losing her own litter. While many would believe that “fighting like cats and dogs,” is the norm, it doesn’t seem to hold true in any of these cases.

Often species will help one another, particularly when it comes to the young. Perhaps it is simply maternal instincts taking over, or paternal or sibling or what-have-you, but whatever the case, many puppies and kittens have been weened and raised successfully by their perceived enemies. The unconditional love  shown could teach us all a thing or two.

Starting with a “T”

As is tradition, McCarty is hoping someone will help him find the perfect name for the newest addition, but it must start with the letter “t” in keeping with the naming protocol. In the meantime, the little family is getting along, greyhounds and kitten cozy and happy.

4 thoughts on “Kitten Finds Comfort Among Litter of Greyhounds”