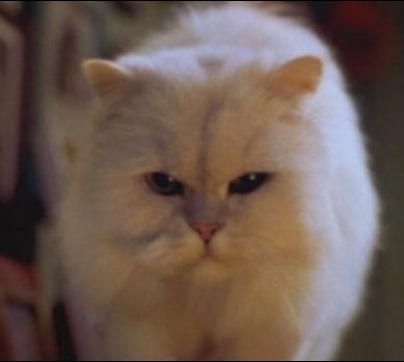 Parks and Recreation actor Chris Pratt stepped in something smelly in the litterbox when he joined in on a war of words that followed the rehoming of  his aged cat via Twitter. The cat, Whitey, is also an actor, having appeared in the movie Stuart Little.

A simple tweet asking if someone wanted to give an old cat a good home provoked an angry reaction that has dredged up a blog post that does not cast the actor in a flattering light. He may have been joking around but the post does not seem funny. It does suggest that the cat is better off in a new home where she will be appreciated.

Criticism poured – or tweeted – in, in response to Pratt’s giving the cat away by twitter post, and the actor fired back. He has since deleted the original tweets. The criticism supposedly included death threats, which seems like an extreme reaction to someone responsibly giving away an unwanted cat.

While the criticism of Pratt has mostly been focused on the callousness of giving away one’s old cat because she’s become an inconvenience to you, and you’d like to clean house in preparation to starting a family, a June blog post on the actor’s website is far worse in its attitude and tone.

The actual “ad” posts doesn’t seem so bad; in fact they seem considerate and caring for someone who wants to free themselves of their obligation to their cat: “Anyone in the LA area want a cat? Full disclosure, she’s old and prone to accidents. So sweet though. And was in Stuart Little (literally)… She is very sweet and needs a good home. We have pugs and she’s too old to deal (with them). She needs one on one attention.”

We have not read all of what went on at Twitter, so cannot report or make judgement on those particulars. We did read the following post from the actor’s website, where he responds to the criticism. Again, a couple of parts are  mildly offensive, but not terrible. The post has since been removed:

“To those of you somehow hung up on the notion that I kicked the walker out from underneath our cat and threw her into the streets, first of all, cats don’t use walkers, so that’s a ridiculous notion.

“I found my aging cat a god damn loving home! Ease up with the death threats for heaven’s sake!

“Bottom line, and not that this is any of your [bleeping] business weirdos, but my wife [Anna Faris] and I want to start a family and we ABSOLUTELY CANNOT have an animal that [bleep] all over the house. Sorry. If you are a parent you will understand. And if not, that probably explains why you have such a hard on for cats. Just sayin.’

“I mean, really? So what I used twitter to give away our pet? I have some people who follow me and I thought maybe somebody would be thrilled to have my old cat. And guess what … Somebody was! Her name is Meghan and as far as I could tell she is a perfectly reasonable, sweet and friendly cat lover.

“I met her to make sure she wasn’t a weirdo before handing the cat over. She is from the same area of the country that my wife and I are from. She has no other pets and was fully aware of Bella’s problems. And despite all that, still opened up her home!… So please! Stop with the harassing tweets! That [bleep] affects me. I’m human.”

So, the guy found a good home for his cat.

Here’s where things really look bad. The following June 2 post from the actor’s website was doubtless not serious (one hopes), but it shows what can at the very least be called a bad attitude, sick sense of humor, and poor taste. As of this writing the post was still on the site.

NOT TO BE WEIRD. BUT WHAT’S THE FASTEST MOST PAINLESS WAY TO KILL THIS CAT?

Published on June 2, 2011 in Random Acts of Me and Thoughts of Importance. 0 Comments

This is Bella. AKA “Whitey” She is literally the cat from Stuart Little. I know a lot of people misuse the word “literally” and its annoying. I am not doing that. This cat is one of the many cats used for principal photography in the motion picture Stuart Little. She played Snowball. I don’t know exactly which scenes she’s in, probably any scenes that include Snowball being a bratty bitch who poops and pees where she pleases. Well. I’m sorry Snowball, AKA Bella AKA Whitey AKA pain in my ass AKA ruiner of my leather office chair, but this is not Hollywood. Well, it is. (We happen to live in Hollywood.) But its not the figurative Hollywood where ex actor cats can get away with urinating on my stuff.

Okay. So. Question is. What’s the best way to kill it? I’m thinking plate of caviar, tuna tar tar, smoked salmon. Let her gently nibble from the veritable feast, until she is full, then cut her head off with a machete. My wife is not so cool with this idea for some reason. And I can’t shoot my gun in city limits and I’m not driving her anywhere for fear she may piss inside my sweet sweet FJ Cruiser.

Whitey may wonder why she has been given away and has lost her home, but, hopefully, she will be happier, more loved, and more appreciated in her new home. Pratt probably did the best thing for the unwanted cat.

3 thoughts on “Hiss! Parks and Recreation Actor Gets Catcalls After Giving Away His Old Cat on Twitter”