Lt. Holly Wasilewski has three cats, two of them shelter rescues, and is known for her love of animals. Not surprisingly, when a woman approached two cops on the street Wednesday night about a kitten heard crying from below ground, the officers knew to call Lt. Wasilewski.

The Lt. rushed to Kimberly Square from a substation several blocks away, and by the time she reached the scene the kitten was howling with loud cries that came up from a storm drain. While waiting for the fire department to send a truck with a ladder that could be used to go down into the sewer, Lt. Wasilewski ran out to fetch a can of cat food and a Corona beer box.

Firefighters arrived at the scene within minutes of being called, removed the drain cover, and pumped a small amount of water from the drain. Then a firefighter went down the ladder and followed the kitten into the drain, tossing cat food. The kitten refused to come to the would-be rescuer, so it was decided that the catloving Lt. would go down. 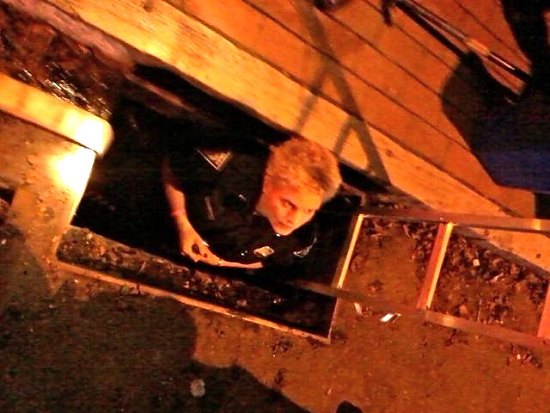 Standing in muck for an hour

Lt. Wasilewski describes what happened next: “I went down there to take a look. I have cats of my own; I know one of my cats is afraid with certain males. I’ve had success rescuing other animals. I was the one who was really pushing the issue; I wanted the cat out.”

The officer spent an hour bending over, coaxing, cajoling, all to no avail. Finally, a firefighter suggested a pole and loop, made one and sent it down. After frustrating failed attempts and modifications to the pole, duct tape was applied and Lt.  Wasilewski was able to successfully loop the kitten and keep it looped. A frightening moment passed as the kitten panicked and fought while being pulled toward the officer, tightening the loop, but it calmed down once it was in her arms. The kitten was then placed into the beer box.

An animal shelter and an animal hospital both said the didn’t have room for the kitten, but the hospital gave it a bath to clean it up and get rid of fleas. The kitten went home with Lt. Wasilewski last night, where it slept on her bed but was not welcomed by the officer’s cats. Another police officer will adopt the kitten.