The fat cat who made headlines for weighing in at 28 pounds will be encouraged to eat to his heart’s content to stabilize his system before beginning his true weight loss regimen.

Walter made headlines when he arrived at the Oregon Humane Society weighing 28 pounds on Jan. 3., when his caretaker had to relinquish him as she entered an assisted living facility. The cat had gained 10 pounds since being adopted from OHS in 2009. He has since lost at least 3 pounds since reentering the shelter, but that rapid weight loss has been an unhealthful change for the overweight kitty. Walter’s weight loss is attributed to the stress of leaving his home and person to return to the shelter, and to his lack of interest in the weight loss formula kibble he was offered there.

Colleen Sanders and Aaron Betancourth were at the head of the line yesterday morning, as Walter was made available for adoption, and they are going to be the 7 year old cat’s new caretakers. Colleen and Aaron were told to let Walter eat as he pleases for the next few weeks, as he makes yet another life transition. He should begin a weight loss regimen in February. The couple were advised to give him a low fat, low carb diabetic formula food in keeping with a “Catkins” eating plan. The second part of the plan is play, and the adoption counselor advised using a laser pointer and toys to get him moving. 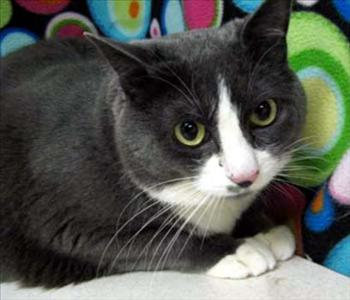 The video below, from the shelter, shows how the poor dear had difficulty even walking due to his excessive weight.

1 thought on “Fat Cat Walter is Adopted, and Ordered to Gain Before Losing”