The following article was written in January, 2013.

Tonight I took in a five month old kitten named Miko, who was born with deformed back legs. His walk is a little goofy, he can’t jump properly and he has an incontinence problem. To top it all off, he’s deaf. He was surrendered by his owner because she didn’t want to deal with his problems.

Wicket is a three year old FIV positive cat. He was dumped in a shopping mall around Christmas time. He is shy at first, but once he gets to know you he is incredibly sweet and loves attention.

Angelica is 15 years old and has a skin condition. Gobble has three legs and no tail. Eyeball is missing an eye. 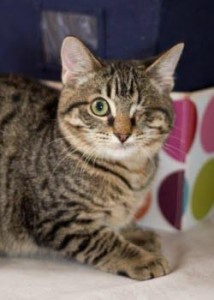 Do these cats deserve a chance at a healthy, happy life? Of course they do.

Some people say no. I’ve heard it all: “Why not just euthanize them?” “No one would ever want to deal with a cat like that, with all those problems.” “They’re too inconvenient and will cost too much money.” “They’re just not worth saving.”

I disagree… I have a dish towel that says “I dream of a world where every cat has a home and every home has a cat.” To me, every cat includes the “unadoptables”. Less desirable animals that people overlook every day, older cats, injured cats, cats with chronic diseases and birth defects need love too.

Gobble is a four month old kitten who was hit by a car at ten weeks old and left at the city pound the day before Thanksgiving. His back leg was broken and his tail was mangled. He also had an upper respiratory infection and ringworm. It cost around $400 to have Gobble’s leg and tail amputated and his back end re-constructed. People questioned why we saved him.

Now, two months later, Gobble is a sweet, loving and playful kitten. He’s getting around wonderfully on his three legs, snuggles with me every night, and has the best attitude of any cat or human I’ve seen. I could never look into those big golden eyes and tell him that he wasn’t worth saving.

Miko is hilarious when he tries to jump and ends up doing a somersault off the couch because his back legs don’t work properly. He’s snuggly, friendly and loves people. He has no idea there’s anything wrong with him.

Eyeball comes running to me every time I walk in the door, and his purr never stops. His “perma-wink” is endearing and adorable.

Could you look those kittens in the eye and tell them they’re not worth it?

If you’re considering adopting a cat, why not consider an “unadoptable”? Take a second look at the older cat in the corner, the one-eyed kitten yearning for a home to call her own, the three legged fuzz ball just wanting a lap to curl up in. Yes, it may take a little more work, a little more money, and a little more time. I can promise you that the love you’ll get in return will be exponentially greater.

2 thoughts on “Are These Cats Worth Saving?”