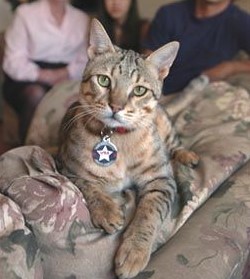 Pfc. Hammer is just one of countless numbers of cats employed during wartime, in service to those who serve and protect us.

From at least the time of ancient Egypt’s greatness to this very day, cats have served in many ways. They are thought to have been used by the ancient Persians to keep the Eygptians from engaging in warfare, due to the Egyptians’ respect for felines. They have controlled vermin and disease, and protected food supplies when employed as mousers. They have been used to alert their human comrades to chemical agents, most notably in the trenches of WWI, where they were employed by the hundreds of thousands. Mostly, they have provided comfort, companionship, therapy, friendship, and a sense of some normalcy to men and women confronting the stresses and horrors of wartime.

Pfc. Hammer is just one of those many thousands, perhaps millions, of cats who have served those who have served us. The well known Iraq war veteran was born on his unit’s base and lived the experience of war with his fellow soldiers. He kept mice away from the food supply, he jumped at the sounds of too-close gunfire and explosions along with his mates, he soothed the soldiers’ frazzled nerves as they soothed his, and he was a sweet friend to all.

Thanks to his chief pal, Staff Sgt. Rick Bousefield, along with US advocacy organization Alley Cat Allies and Military Mascots, Hammer followed his fellow soldiers back to the States, and retired from military service, taking on the role of family pet to Rick Bousefiled.

We salute the famous cats and those who’ve been forgotten. Thank you for your service.