… then maybe you should open it up and see if there is a cat in there. 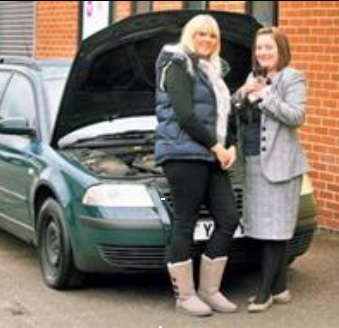 Charlotte Keeling and Becky Mawbey share a work vehicle in Ashbourn UK and noticed odd “meow” sounds coming from the car’s engine compartment as they drove around over a three day period.

Becky is quoted as saying that she’d heard something but thought nothing of it until she pulled over and heard what sounded like a cat stuck somewhere. At that point the light bulb finally went on and the gals from the company office came out to the VW Passat to help look. Once the  hood was lifted it bacame obvious to all that an animal was trapped in the engine compartment. Kitty was finally removed when someone called for a man and company director Keith Froggatt came out and began unscrewing parts until the kitten could be removed, dirty and hungry but otherwise unscathed. The kitten, a girl currently being called VW, was taken to a vet and checked.

So, the moral of the story is, if it sounds like you have a cat under your hood, by all means open her up and take a look.

Shown in the photo, VW the kitten with her rescuers Kristy Lemon and Charlotte Keeling

2 thoughts on “Um, if it sounds like meowing coming from under the hood …”