No animal should suffer in its last moments of life. But that’s what happens every time a cat or dog is shut inside a gas chamber. That’s why dedicated animal advocates are fighting to shut down every last gas box in the eight states where animals are still gassed to death. Real progress is being made. And sometimes miracles happen.

Andrea the cat survived two attempts to gas her and her small body was stuffed in a plastic bag and left in a cooler before West Valley City animal shelter workers realized she was still alive and took pity on her, according to a 2011 report in the Salt Lake Tribune. “She’s pretty tough, obviously,” said Janita Coombs of Syracuse, a volunteer with the Community Animal Welfare Society, who took Andrea  home and adopted her. Today, the same shelter that tried to gas Andrea the cat no longer uses carbon monoxide and is instead a “proud no-kill shelter.”

Then there’s Daniel the beagle, who was supposed to die the day he was locked into a gas chamber at a shelter in Florence, Alabama. After 17 minutes in the metal box filled with carbon monoxide, Daniel walked out, the only one among 18 dogs still alive. He now has a home in New Jersey and is the poster dog for Eleventh Hour Rescue, a group dedicated to saving dogs from death row in high-kill shelters.

His tale of survival inspired Daniel’s Law, which permanently banned the use of gas chambers in the state of Pennsylvania. (You can see Daniel romping in this YouTube video.) In North Carolina alone, the Humane Society of the United States has helped nearly a dozen shelters stop using gas boxes. There are many other success stories. In April of 2013, the town of Lucedale, Mississippi voted to remove what was the last active gas chamber in the state.  In Heber, Utah, a small, dark room where animals used to be gassed has been converted into a light-filled cat room at the Heber Valley Animal Shelter. The Heber Valley  shelter is now a no kill facility, thanks to Paws for Life of Utah. When the gas box was torn out, Paws for Life held a “Bash the Gas” event in the park. Anyone who made a small donation to the shelter got to take a swing at the gas box. 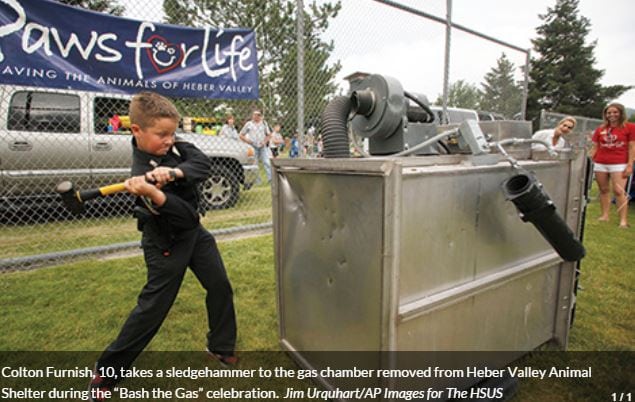 Just last month, No Kill New York won a hard-fought campaign to shut down a gas chamber at a facility notorious for gassing healthy dogs and cats. The city-run shelter in Shawnee, Oklahoma routinely gassed dozens of animals, killing up to 250 a month, said Kathryn Riviello, president of No Kill New York, which conducted over night sit-in protests and used a video and social media to persuade the town council and city manager to end the barbaric practice.

Today, a majority of states still permit this shockingly inhumane method that is condemned by all leading animal welfare groups, including the American Humane Association, HSUS, the ASPCA and No Kill New York. Terrified animals sometimes turn on each other in the confines of the gas box, said Riviello. They vomit and suffer convulsions during the 20 to 30 minutes it takes for them to die. “I can’t say enough about how horrible it is for an animal to die this way,” said Riviello, who is spearheading a national campaign to locate and close every gas chamber in the country, starting with the state of Missouri. She wants your help. Part of the problem is the lack of information. “I think the Shawnee gas chamber was the last in state of Oklahoma, but it might not be,” said Riviello, who is asking people to report the names and locations of facilities that use gas boxes at [email protected]

Consider the facts. It can take up to 30 minutes to kill a dog in a gas chamber, whereas injection causes loss of consciousness in 3 to 5 seconds. And shelters that use gas chambers have more trouble attracting volunteers and donations. “When you have a shelter that’s gassing, the community doesn’t want to go there,” says Kim Alboum of HSUS. “Once it’s gone, there’s a higher level of trust.”

On February 11, the Humane Society of Utah and HSUS are holding a Humane Lobby Day at the state capitol. The public is encourged to attend and take part to help spread the word.