A  Texas veterinarian who killed a cat with a bow and arrow, bragged about it, and joked that she deserved an award has lost her job, is under investigation as charges are being considered against her, and has ignited widespread outrage.

When Dr. Kristen Lindsey, DVM, posted the disturbing image seen above showing herself posing with the trophy of the cat she had just killed with a bow and arrow to her Facebook page Wednesday night outrage quickly spread as it was seen by horrified animal lovers and others who felt it was completely inappropriate for someone in her position.

The post reads “My first bow kill, lol. The only good feral tomcat is one with an arrow through it’s head! Vet of the year award … Gladly accepted.”

Brenham police say the cat was shot in Austin County. The Austin County Sheriff’s Office is investigating the complaints, and Sheriff Jack Brandes sent deputies out to the scene of the incident Friday morning.

“This kind of stuff shouldn’t happen in our society,” Brandes said. “It’s a very sad thing. Hopefully we will get to the bottom of it and get the truth, 100% truth, and get it to the DA and put it in his hands if it needs to go any further.”

In the comment section of her post, Lindsey wrote “no I did not lose my job. Lol. Psshh. Like someone would get rid of me. I’m awesome!”

Lindsey’s employer, the Washington Animal Clinic, in Brenham, evidently did not think she was so awesome after all. The clinic blanked her name off their sign with silver tape, promptly fired her, and issued a statement expressing complete disapproval of her actions.

The clinic says they received more than 500 calls Friday morning.

“Our goal now is to go on and try to fix our black eye and hope that people are reasonable and understand that those actions don’t anyway portray what we’re for here at Washington Animal Clinic,” said Dr. Bruce Buenger. “We put our heart and soul into this place.”

Alley Cat Allies is offering a $7,500 reward for evidence leading to the arrest and conviction of the person or persons responsible for killing the cat in Austin County. (See their press release on the matter, which follows below the news video in this post.)

“Animal cruelty must be taken seriously, and the guilty parties should be punished to the fullest extent of the law,” said Becky Robinson, president and founder of Alley Cat Allies.

The incident became yet more sickening Friday afternoon when questions arose over the cat’s identity.  Some believe that the cat was not a feral but a missing neutered pet named Tiger.

Readers may wish to visit or follow the Justice for Cat Murdered By Kristen Lindsey Facebook page. The page is advocating for justice and is sharing information related to the case. It is also working to keep the facts surrounding the matter straight, and to discourage misplaced attacks toward the Washington Animal Clinic, which has strongly distanced itself from Lindsey.

The clinic is not just dealing with complaints about Lindsey, they are also getting criticism from her supporters, some of whom are seen in the KBTX news report below.

We expect this story to continue as details unfold.

Watch the KBTX report on the case:

BETHESDA, MD—Alley Cat Allies is offering a $7,500 reward for evidence leading to the arrest and conviction of the person or persons responsible for killing a cat in Austin County, Texas. Anyone with information is asked to contact the Austin County Sheriff Office at (979)-865-3111.

A photo posted on Facebook depicted the alleged perpetrator holding a dead cat by an arrow through the cat’s head. “Animal cruelty must be taken seriously, and the guilty parties should be punished to the fullest extent of the law,” said Becky Robinson, president and founder of Alley Cat Allies.

Intentionally killing a cat—pet, stray or feral—is against the law in all 50 states and the District of Columbia. This gruesome incident is cause for alarm for the community’s safety. Psychiatric and criminological research has established a clear link between cruelty to animals and a host of other violent behaviors toward people. 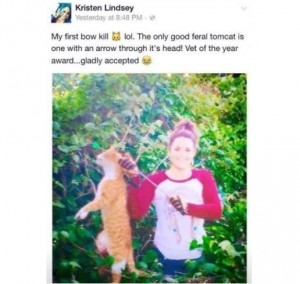