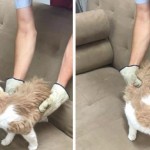 When Rachel Barbee donated her old couch to Deseret Industries in Price, Utah, she had no idea that her cat was actually hidden inside. Barbee, of Carbon County, was preparing for a move and had been donating many of her items. But she thought that she would take the couch to the dump, instead - a move which could have meant that she would never have been reunited with her … END_OF_DOCUMENT_TOKEN_TO_BE_REPLACED