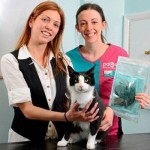 . Cat who got in a knot is saved by PDSA Black-and-white cat Garry, from Hove, UK went along to the Brighton PDSA Pet Hospital for his annual vaccine booster, where PDSA vets discovered an extremely worrying large mass in his stomach. The two-year-old cat was admitted for further tests, and worried owner Ana Barbosa was told to prepare for the worst, as a … END_OF_DOCUMENT_TOKEN_TO_BE_REPLACED