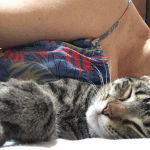 Welcome to Pussies Galore Rancho, where kitties can vacation with you. If you don't have a cat, one will be provided. It's run by Katina Balson of Pussies Galore cat rescue in Brisbane, Australia. "Bring your cat and share your holiday in this charming secluded inner city hideaway. Paddington/Red Hill is only minutes from the city and cafe` regions. The area is leafy and … END_OF_DOCUMENT_TOKEN_TO_BE_REPLACED 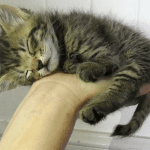 The Queensland farmer who owned their HIV-infected mother was going to drown them. But Katina Balson of Cat Cuddle Cafe in Brisbane, Australia had other plans for these kittens born with twisted limbs, who have already undergone surgery and are running around like little goats, according to Balson. Two of the three kittens, including Phylis, shown above, were suffering … END_OF_DOCUMENT_TOKEN_TO_BE_REPLACED