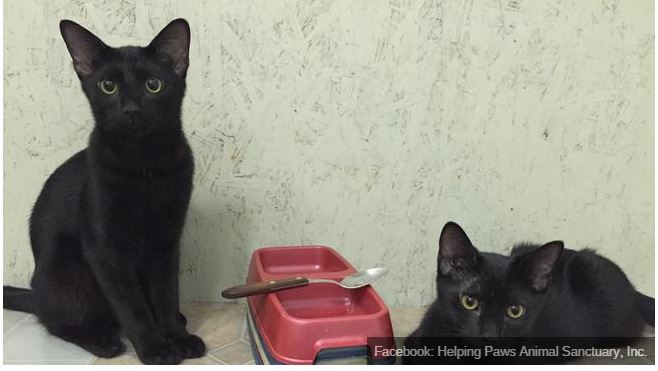 Newsflash: Denmark doesn’t have any black domestic shorthair cats available for adoption. Turns out, there are plenty in Florida. So Per and Emily Larsen did some emailing, then made a Skype call to the Lee County Animal Services in Fort Meyers, and arranged for kittens Mau and Lua to be flown almost 4,800 miles to Denmark where the Larsens live, according to USA Today and the Fort Meyers News Press.

Why go to all that trouble to adopt two black kittens? The Larsens used to live in Las Vegas and had a adopted a black cat there from a PetSmart store, the USA Today article states. After their cat Lucas died of cancer at age six, the Larsens were heart broken. They loved Lucas so much, they decided they had to have another black cat. “They wanted another one—a plain, ordcinary black cat, the kind nobody here wants,” said Executive Director Marnie Miszewski of Helping Paws Animal Sancatury, who spoke to USA Today. Helping Paws runs a shelter on Pine Island that houses some 200 healthy and special-needs cats, including black ones.

Surprisingly, Denmark doesn’t have American shorthair cats. So the Larsens reached out to the Cat Fanciers Association in the United States, who put them in touch with Lee County Animal Services and Miszewski. The Danish couple saw the two male kittens via Skype and decided to adopt them both. Black cats are sometimes harder to find homes for, but in this case it helped close the deal. Miszewski told USA Today that she is not surprised that the Larsens have a thing for sleek, ebony kitties. ““I absolutely adore black cats,” Miszewski said. “They are smart, active and super playful.”

At first, the Larsens wanted to come to Florida to pick up the cats, then changed their minds in light of the Paris terror attacks, according to USA Today and the News-Press. They worked with a Tampa-based pet air rescue operation to have the cats flown to Europe for slightly more than $3,000. The kittens are reportedly settling into their new home and doing fine.