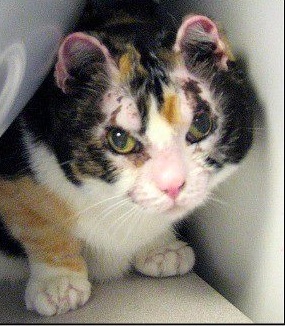 October 11, 2013. NOTE: This post originally ran two years ago, to remember Scarlett, the cat who ran into a burning building to save her kittens, on the third anniversary of her passing. An online event that year commemorated the brave and loving cat and allowed well-wishes to leave messages for her loving petmom, Karen Wellen, who maintains the Scarlett the Cat page on Facebook.

We know that Karen is thinking of her beloved cat Scarlett today, on the fifth anniversary of her passing, and would be appreciative of visits made to Scarlett’s page and any messages readers may leave there. Despite Scarlett’s passing, the page remains active and worth following. 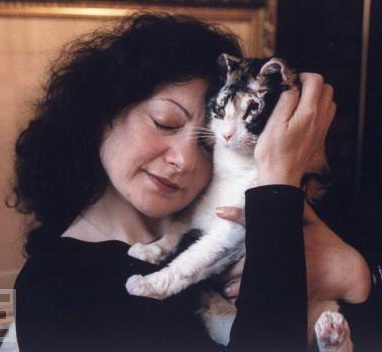 Karen and Scarlett, in a photo from a Life magazine feature

Karen included the following  passages about Scarlett’s heroic deed, her life, and her passing, for her cat’s Facebook page Scarlett the Cat:

Scarlett was a former stray cat, probably born in 1995, whose efforts to save her kittens from a fire, at serious harm to herself, attracted worldwide media attention and has been related in a number of non-fiction books, TV shows, magazine articles, etc.

Her road to fame began on March 30 1996. Scarlett was in an abandoned garage allegedly used as a crack house in Brooklyn, New York, with her five kittens when a fire started for undetermined reasons. The New York Fire Department responded to a call about the fire and quickly extinguished it. When the fire was under control, one of the firefighters on the scene, David Giannelli, noticed a few of the month-old kittens outside of the garage. Their mother (Scarlett) was nowhere to be found. Eventually he found her, barely clinging to life. She was severely burned in the process of pulling each kitten from the fire. Her eyes were blistered shut, her ears were severely burned, as were her paws and her fur. The hair on her face was almost completely burned away. Giannelli carefully put them in a box he had found and raced them to the veterinary clinic of the North Shore Animal League in Port Washington.

The vets at the League were not optimistic for Scarlett’s survival. But they saw her devotion to her babies firsthand when they were reunited briefly (Scarlett’s burns necessitated her being separated from them). The blisters on her eyes kept her from being able to see her kittens. But Scarlett touched each of her five kittens with her nose to ensure they were all there and alive! Sadly, the weakest kitten, a white one, died of a virus a month after the fire. However, after three months of treatment and recovery, during which time one of the staff of the League stated Scarlett was “spoiled rotten” and treated like a queen, Scarlett and her surviving kittens were well enough to be adopted.

The story of this feline mother’s heroic efforts to save her kittens attracted worldwide media attention, and the League received countless phone calls and 7,000 letters offering to adopt Scarlett and her kittens. It ultimately chose to divide the kittens into two pairs, and the two pairs of kittens were given for adoption to residents of Long Island. Scarlett herself was adopted out to Karen Wellen. In her letter, Wellen indicated that, as a result of losing her cat shortly after being injured in a traffic accident herself, she had become more compassionate and would take in only animals with special needs.

The North Shore Animal League has created an award named “The Scarlett Award for Animal Heroism” in her honor. This award is presented to animals that have engaged in heroic acts to benefit others, whether humans or animals. 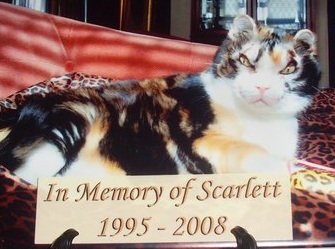 “Scarlett was adopted by my family, the Wellens, in June, 1996. She loved to eat, play, snoop around, eat, greet guests, eat, show off and purr, love and sleep. And eat. There were subtle changes in her behavior that first manifested in 2006. But all the tests came back fine. Eventually, in June 2007–on the anniversary of her adoption–she was diagnosed with inoperable lymphoma. There is the school of thought it could have been triggered by food tainted with melamine. We’ll never know. Scarlett responded well to a regimen of chemo and steroids. She was still in remission at the time of her death. However, there were so many other health problems that plagued her: she had been treated for hyperthyroidism, dental disease and kidney disease, which caused her to keep falling. And then there was the heart murmur. All through this horrible time, she remained loving and sweet. My family couldn’t let her suffer any more; she was never going to recover. On October 11, 2008, we took her to her Oncologist’s office. I held her in my arms for one last time. My mother sang “You Are So Beautiful” to her, as she did every day. And Scarlett peacefully passed from her life of pain. But her amazing spirit lives on in the hearts of all who have known and loved her.”

Here’s an Inside Edition report with Scarlett and Karen from some years ago. 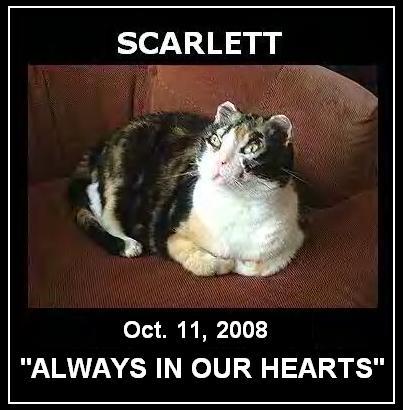 0 thoughts on “Scarlett the Cat Remembered: A Special Day”