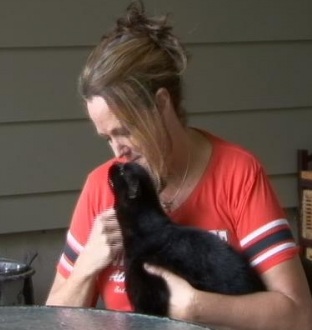 Albany, Oregon petmom Jill Petreny got her cat back after 11 long days. Easy went missing on Wednesday, September 28, and a few days later, neighbor Ray Henry admitted to trapping Easy and setting him loose across town. Jill was devastated at her loss and worried for her cat’s safety and well being upon learning that he was by himself in a strange area.

Publicity from newspaper and television coverage, plus missing posters helped to find Easy and bring him home, as members from the community joined in the search. It was newspaper coverage that caused Dennis Rivera to suspect that the cat he and wife Kate had seen hanging around their home was the missing Easy. Dennis works in the circulation department of the Democrat-Herald and had read their stories on Easy’s catnapping and Jill’s search.

Jill’s boyfriend Mike Lovemark wonders if the fact that the Riveras keep chickens drew Easy to their home; Jill and Mike also keep chickens, so Easy may have been attracted by familiarity.

The Riveras lured Easy to safety, returned him to his family on Sunday, October 9, and refused the $250 reward that had been offered for Easy’s return.

Easy is happy to be home and, along with Jill, the family dog Bo is thrilled to have him back, too.

Cat trapper and dumper Ray Henry says Easy and other cats were pooping in his yard, and admits to trapping and dumping three of them. He claims not to have known who Easy’s family was when he dumped him. Jill says Henry initially denied taking her cat, but eventually admitted to it. Neighbor Gary Cox’s two cats Sammy and Kirby are missing, and it is thought that more cats have disappeared. Gary looks for his cats in north Albany every day. Ray Henry is charged with one count of animal abandonment and is scheduled to appear in court on October 17. By law, he was allowed to trap the cat but not to dump him. He was obligated to return him to his family or take him to a shelter.

News video from after Easy’s return.

News video from last week, before Easy was found and returned home. Jill talks about what it’s like to have Easy missing.