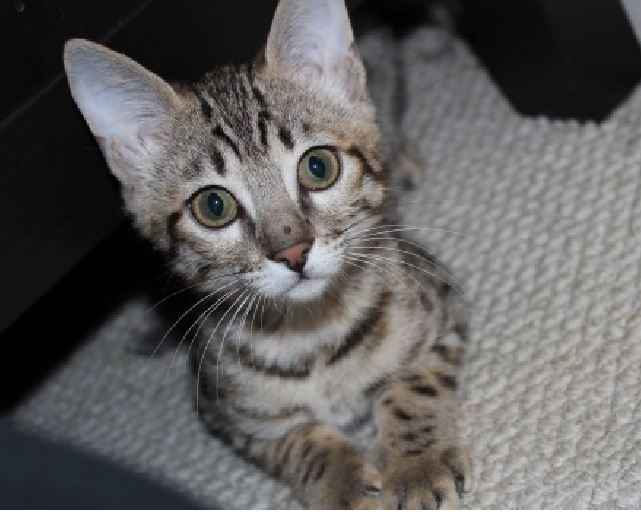 A man was horrified to see his 8 month old Savannah cat jump from their 17th floor balcony and was distraught when he couldn’t find her. Kitty was discovered to have completely escaped injury when she was finally found.

New Westminster, British Columbia resident Joel Isfeld says Cleo managed to slip out onto his patio Sunday night, headed right for the balcony railing and proceeded to jump off before he had time to act.

“It was like, all of a sudden she was gone,” Joel told Global News. “I was in shock for a moment. I looked over and said, did that really happen?”

Joel says Cleo is an excitable and super high energy kitten and, as a Savannah, she is highly athletic.

“But I was in utter shock and disbelief,” despite that knowledge, he said.

Joel was sure he would find a terrible scene when he reached the ground after rushing to find his cat, but she was nowhere to be found. He searched the area to no avail, then expanded his effort.

The building’s security guard took him to every floor of his building to ask the other residents if they’d seen his cat.

“I got them all to search their balconies to no avail,” he said.

Joel says he “went wild” trying to find Cleo, posting on Facebook, talking to his neighbors, calling the SPCA and contemplating hiring a missing pet search organization that uses bloodhounds.

Joel says the response he got from his Facebook post was amazing, with many people sending messages and trying to help.

Late Monday night, the worrying and wondering, and the frantic search, were over. The security guard called at between 10 and 11 p.m., saying  a neighbor living on the floor above Joel had located Cleo.

“She was shaken up, but other than that she was totally OK. No broken bones, no scrapes, just a small cut on her mouth.”

“When I got the call, I was overjoyed.”

“I met up with the resident who found her and gave him a big hug.”

Cleo was lucky this time, but she will not get another opportunity to try the stunt again. Jeol is installing a screen door to keep Cleo off of the balcony and say she will remain a strictly indoors only cat.