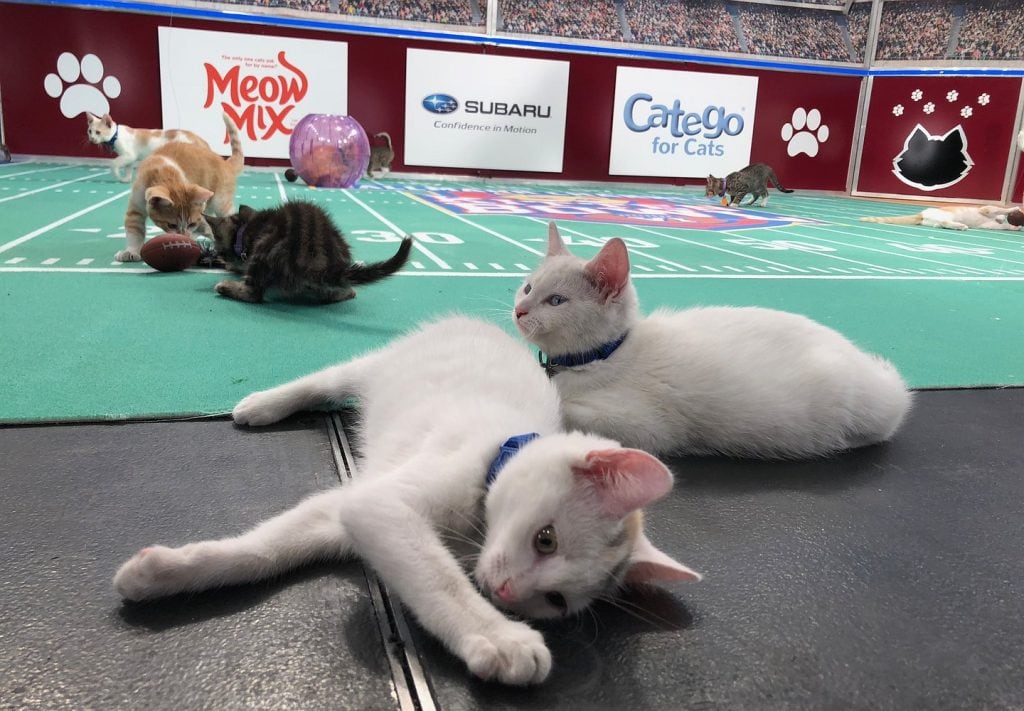 What is better than a kitten? MORE kittens which is perhaps no better demonstrated that with Hallmark’s annual Kitten Bowl and practice has begun for the 2019 event. Aligned with the NFL’s Super Bowl, Kitten Bowl gives cat fans an alternative to game day television that is fraught with cuteness.

Kitten Bowl debuted on the Hallmark Channel  February 2, 2014.  Partnering with New York’s North Shore Animal League and Last Hope Animal Rescue, dovetailing in the success of Animal Planet’s Puppy Bowl, the event was set up to counter Super Bowl XLVIII between the Denver Broncos and Seattle Seahawks. Viewership for the program proved wildly popular and has grown each year.

The kittens for this year’s main event are starting their workouts with pre-season practice in full force. Like any pawthlete, these little gridders are taking it to heart. While the program provides lots of giggles and plenty of “awwwwwws” for those watching, it is the reason behind the Kitten Bowl that is the key driver. At the heart of the playbook, as with any gameplay, is the desire to win. The ultimate goal for Kitten Bowl is to not only highlight adorable kittens, but speak to the viewership to consider adopting from their local animal shelter or rescue with the philosophy of ADOPT DON’T SHOP as espoused in their Adoption Ever After program.

Through these collective efforts, not only is awareness raised to the plight of animals in shelters, but it will, hopefully, give those who tune in the opportunity to consider when next they are looking for a pet to think, first, about their local organizations. For those who already have animals in the household, perhaps a gentle reminder, too, to make sure their pets are spayed and neutered. It doesn’t often happen in today’s competitive sports environment, but in this case, the final score can be a win-win for one and all.

Can’t get enough Kitten Bowl? Wish it happened every day? Need a little office breather? Then subscribe to Hallmark’s Kitten Bowl Channel! You will surely get your daily fill of fluff. And we mean that in the best possible way.

0 thoughts on “Preparations Under Way for Kitten Bowl VI”