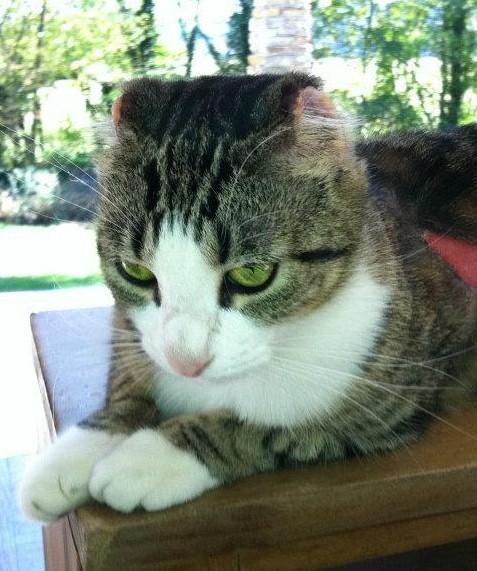 A Baltimore MD cat who made headlines in January of this year has been named the ASPCA’s Cat of the Year. Mittens was placed in a milk crate, doused with lighter fluid and set on fire by two 17 year olds. She got out of the box and ran around until the flames went out, then returned to the house where her abusers were, because her kittens were also there. She walked toward the source of her torment so she could continue to nurse and tend to the kittens. Mittens received severe 3rd and 4th degree burns from the horrific incident. Fortunately, someone called the police, and she and her kittens were taken into the care of BARCS (Baltimore Animal Rescue and Care Shelter). Mittens recovered and now has a good home with Cindy Wright.

The dedicated Mama cat became a symbol and rallying figure in helping to institute stronger animal abuse laws in Maryland. Baltimore lawyer Caroline Griffin is also being honored by the ASPCA for her instrumental work in getting animals greater protection under the law in Maryland. Caroline is closely associated with the notorious case of Phoenix, the West Baltimore pit bull who was doused with gasoline and lit on fire in 2009. She is the recipient of the ASPCA’s Presidential Service Award, and is chairman of Baltimore’s Anti Animal Abuse Commission.

Readers may recall our Tough Yet Tender post from earlier this week, featuring superb photos of professional fighter and cat lover John Rallo, a resident of Baltimore and participant in a campaign to discourage young people from committing such acts; which are, sadly all to common in the Baltimore area. Baltimore has set itself apart from many places with such problems by attempting to address the matter.

This video was made shortly after the incident, when Mittens and her kittens were still in the care of BARCS.

5 thoughts on “Mittens: ASPCA Cat Of The Year”