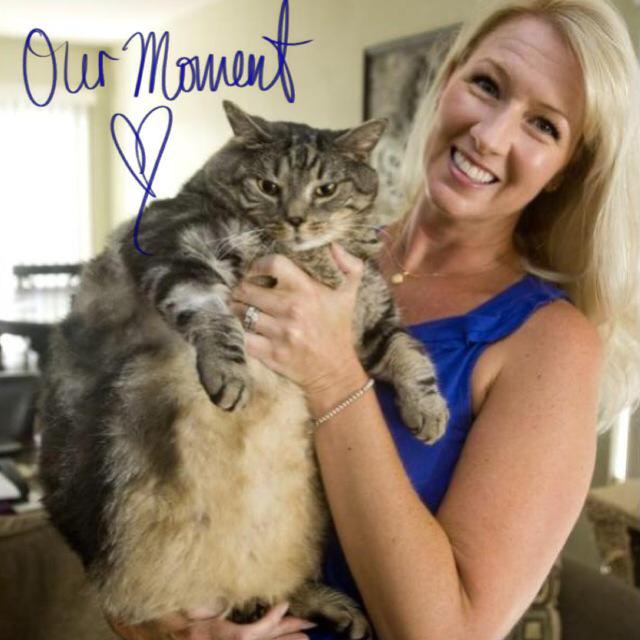 The very big kitty named Little Dude has passed away, just two short weeks after beginning a new phase in his life. The sweet but morbidly obese 36 pound cat was taken in by WAGS – Westminster Adoption Group and Services, of Westminster, California in late August and placed in a loving foster home where he was expected to lose weight and regain mobility to prepare him for adoption into a new home.

Little Dude’s family relinquished him to WAGS, citing financial hardship and saying their apartment complex had raised the additional amount charged to renters with pets.

Little Dude was placed with Costa Mesa resident Angela Jackson-Brunning and her family, who have fostered several times for WAGS and have adopted from them. Angela set up the A BIG Little Dude Facebook page, where she shared photos, video and written updates on Little Dude’s weight loss journey and his time  living with her family.

Sadly, Little Dude, like so many greatly obese cats who have been rescued after losing their previous homes and families, did not live long. He passed away Saturday night after suddenly going into distress.

Angela woke up in a panic on Saturday morning, finding Little Dude gasping for air, with purple gums and dilated pupils. She immediately tried to suction sticky fluid that was filling his mouth and nose, then rushed him to the hospital at Westminster Vet Group. Little Dude spent the day fighting pneumonia, but the extra strain on his lungs from being three times his ideal weight, plus the stress of losing his original home, going to the shelter and then acclimating to a new, though caring, environment, proved to be too much, and he was unable to pull through. His vets used nebulizer treatments and antibiotics, along with continued suctioning, all to no avail. Little Dude had also made a sudden 3 pound drop in weight over two days, going from the 33 ponds he’d achieved on a careful weight loss plan to 30 pounds. The quick, unregulated loss of 3 pounds also placed a strain on the cat’s system. As many cat owners know, a cat is at risk for hepatic lipidosis if they lose weight too quickly.  It goes withot saying that Little Dude’s caregivers were well aware of that danger and had him on a closely monitored plan.

Angela posted several photos of Little Dude in the hospital on Saturday. We won’t share them in this post, but they can be seen HERE.

Angela made a somber announcement of the news of Little Dude’s passing at Facebook on Sunday, writing:

“It is with tremendous sadness I must tell you all that our precious Little Dude has peacefully slipped away while in the arms of love. He was tired…just so, so very tired.

“I am eternally grateful to have been the one to have loved him and shared him with the world. Your support and encouragement undoubtedly helped him through these final days – and it helped me, too.

“Little Dude was a treasure. A beautiful, precious, invaluable gem. I have never known a soul like him and I doubt I ever will. I am so blessed to have been his foster Mom…incredibly blessed.

“Please know we did everything humanly possible to help him. I have no regrets and I’m certain LD would say he was pleased to be genuinely loved and adored by so many worldwide.

“You are healed now, Little Dude. Heaven shines brighter with you there….and you can finally run again. Run free among the rainbows, my sweet boy…run free. You will never be forgotten.”

“Our doctors feel that he succumbed to the sheer size of him,” said Cortney Dorney, the shelter manager at WAGS. “It was really difficult for him to breathe and the stress of being displaced from his home is pretty common for adult cats – and he was a senior cat.”

A few people posting to Facebook in the aftermath of Little Dude’s passing have been cruel and have wrongly blamed the people working so hard to help Little Dude. Most people, however, have properly been sympathetic and offered their condolences.