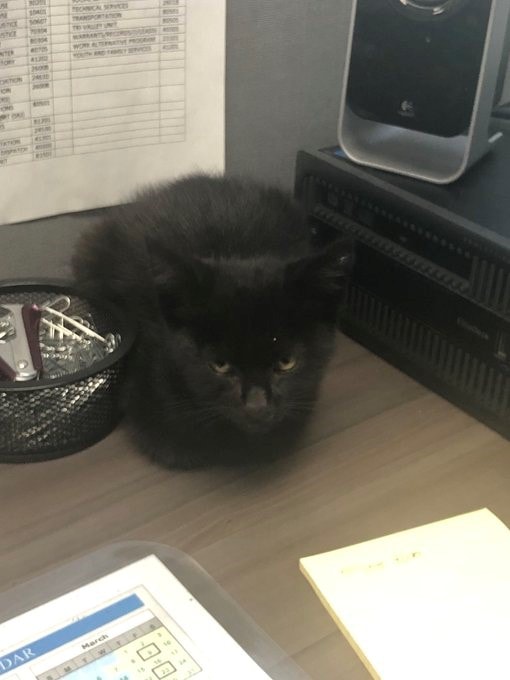 There have been countless stories over the years about animals that have ingratiated themselves into a variety of situations. A cat wandering into a library. A puppy who sits on door stoop. A kitten who appears at a local cafe. A Dog stumbling into a grocery store. Sometimes those situations are comical or curious and, occasionally, perplexing. Where did the animal come from? Was it dropped off purposefully? Abandoned? Lost? And why do they seem to know they will be accepted and already belong? Good questions all, though they may never be answered, but for anyone who has ever been on the receiving end of an animal determined to settle in somewhere, the situation can be as equally surprising as it is welcoming. Just query the sheriffs and deputies in one office that recently experienced both in the form of a kitten.

Seems a stray decided the Alameda County Sheriff’s Office was in need of a cat, at least for a little while. Finding a friendly sergeant, the new four-legged recruit quickly settled in, taking over a conveniently located printer, which appeared to be an ideal place for cat naps.The next logical step, as things would naturally go, was what to name this little guy who had already taken over the office? So they took to social media and asked the public to weigh in on the new moniker. Afterall, as T. S. Eliot reflected, “The naming of cats is a difficult matter.”

While a name is certainly important, even more important was finding him a home. To his good fortune, one of the deputies decided he would make the ideal roommate and adopted the little guy. It appears this kitten may have had a deliberate plan all along. Find himself a name, a job, and a forever home.

Stlll, the big question remains. What do you name a kitten who makes itself at home on a printer in a Sherriff’s office? Why Cop E. Cat, of course!

3 thoughts on “Kitten Makes Self Home at Sheriff’s Office”