Cats end up in some crazy places. But an offshore oil rig? That’s right. And therein hangs a tale with a happy ending.

A 3-month-old calico kitten apparently climbed into a shipping container while it was being loaded, and was not found until she appeared on an oil rig platform 50 kilometers off the coast of western New Zealand, according to a report on STUFF.co. 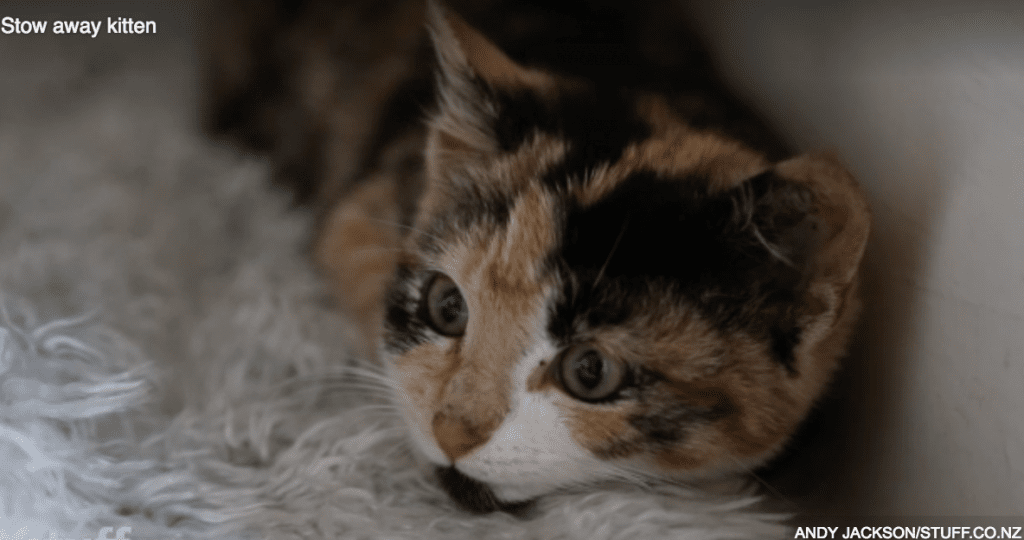 “It’s unusual to have a small animal or bird found offshore but it has happened before,” Rob Jager of Shell New Zealand told Stuff.co.

Luckily for Maui–named for the gas field where she was found–the workers at the site are animal lovers. Maui was given a meal of sardines and milk, and looked after by the platform’s medic, Rebekah Smith, before being put in a carrier and flown back to the mainland by helicopter. Animals are not allowed on the platform, and rules are rules! Veterinarian Gemma Kinross, pictured below, said she got a call from a client who asked to borrow a carrier to take to the Maui B platform where the hungry and very dirty kitten was discovered. According to the report on Stuff, “one of the guys from the Maui team is taking her home. He looked after her when she was offshore and has convinced his wife they should keep her.”

She’s now being cared for at a veterinary clinic in New Plymouth until her adoptive family takes her home, according to Stuff.co.  Apparently the Taranaki region is very beautiful. Maybe little Maui will become a land lubber if she has a proper home.