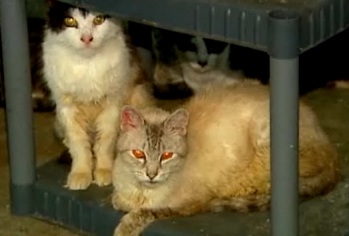 Kansas City MO animal control seized 153 live cats from woman’s home on Monday and found many dead cats in a freezer. Updates include a report on the cats, discovery of a previous seizure and a surprising interview with the woman.

KC animal control officers made the large seizure on Monday after receiving complaints from neighbors about the stench coming from a house occupied by Dolores Ann Metcalf (aka Dolores Flores). The officers described filthy conditions and a house filled with animal waste.

The cats are being isolated away from other cats at the city shelter and are currently housed in the basement of the facility while health assesments are being done. The city ran a 2-for-1 special adoption event today to try to move out the other cats in residence at the shelter. Many of the seized cats have been determined to have intestinal parasites, respiratory infection and fleas. Ms. Metcalf had medications on hand which she tried to send with the cats but the city refused them, citing regulations and procedures. The number of dead frozen cats differs between local news reports – with numbers ranging from 50 to 180.

Ms. Metcalf speaks with a reporter in the KCTV news video below, though her voice is muffled and her face hidden. She speaks of her attachment and closeness with her cats and her fears for them now that they are in city custody, while expressing her distrust and dislike of many people. She also gives explanations for the situation with the cats, which may possibly be true but which we do not feel comfortable accepting at face value. We do believe that Ms. Metcalf loves the cats and worries about their fate. She is charged with having more cats than allowed and with animal cruelty.

KMBC news reports that Ms. Metcalf had 100 cats seized from a trailer in Liberty MO in 2001, and several dead cats were found in a refrigerator in that instance.