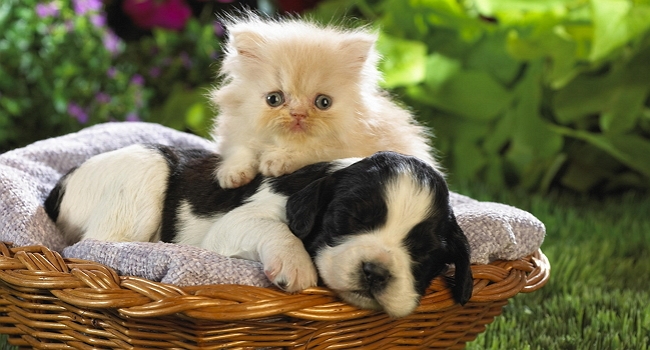 With kitten season being in full-force, not only is it a good time to remind everyone to spay and neuter their pets, it is also a good time to remind everyone about the joys of having feline and canine siblings in the home.  Introducing youngster to youngster can sometimes be easier than bringing together an adult with a puppy or kitten, but for the most part it all comes down to five simple things; the personality of the individual animals, giving them their own space, putting them together in a neutral space, and, perhaps most importantly, time and patience.

Sure, there will be some swatting and batting, not to mention smelling, but that is all part of the familiarity ritual. Canadian Living suggests the following:

1. Socialize your pet
A dog’s optimum socialization period begins to decline at three months of age; a cat’s often ends at seven to nine weeks. If a puppy or kitten is properly introduced and gets used to another species at a young age, it is more likely to adapt and learn the other animal’s language.

It helps if the animal you already have has been exposed to the other species. And consider adopting the second pet from either a (responsible) breeder or a rescue organization. Breeders often raise dogs and cats together. And if it’s been done in a controlled manner, a dog will be pretty complacent about cats, and will either like them or ignore them, says Dr. Liana Mawer, a veterinarian at Brandon Hills Veterinary Clinic in Manitoba. And a rescue organization has likely pre-screened the animals and can tell you what type of home would be best.

3. Give your pets separate rooms
When your new pet first moves in, confine one of the animals to a separate room. This will limit their physical contact while allowing them to get used to each other’s smell and sound. Just make sure that the confined animal has everything it needs (toys, litter box, water, perching areas, etc.) in the room and that you’re still giving it plenty of attention. Progress to opening the door an inch or so to allow a little contact.

4. Introduce your pets to each other
Once both the dog and cat seem comfortable with the animal on the other side of the door, you can do a face-to-face introduction, with the dog on leash. Teach the dog focus exercises beforehand and do them when it first meets the cat. For example, have the dog sit and show it a treat in your hand. Hold the treat in front of its nose, move it up to your eye, then back to the dog’s nose. Give the dog the treat if it looked at you. Doing this keeps the dog’s attention on you, not the cat, says Mawer.

5. Put a stop to bad pet behaviour
Keep a water pistol handy in case a fight breaks out. Let the animals know this is unacceptable by banishing them to separate areas of the house for a time-out. “But you don’t want it to be the confinement room or a crate,” says Mawer. “You don’t want the animals to associate those places with anything negative.”

6. Encourage good pet behaviour
When the animals are together, give them both treats. This teaches them that good things happen for one when the other is around. “We want to encourage the cat with as many rewards as possible to be around the dog and not be frightened of it,” says Landsberg. “But with the dog, we want to teach it how to behave around the cat.”

And just in case you want a whole lot more…