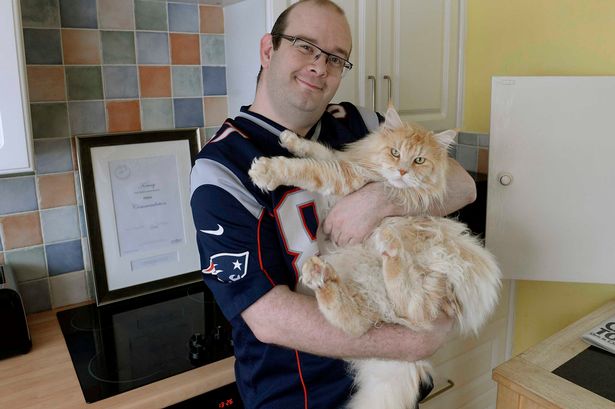 A brave and determined cat saved his petdad and fellow cats and raised the alarm in time for the house to be saved when a fire started in the kitchen.

Kenny the Maine Coon cat is being hailed as a hero for running upstairs to wake his petdad after another cat accidentally turned the stove on and started a fire.

Rather than running out the cat flap to safety as the house filled with smoke, the 5 year old cat went upstairs and straight to Chris Oakley, waking him by persistently jumping up and down on his chest and wailing loudly.

When Chris woke and got up, Kenny led him downstairs into the kitchen. Chris was able to put out the fire before it spread to engulf the home.

Chris lives with his parents in the house in Greenstead, Essex, UK but was the only one home with the family’s cats at the time of the fire. Chris, Kenny, and the family’s three other Maine Coon cats were all ok following the fire.

Chris’ father, Colin says the house smelled strongly of smoke when he got in from work and gave thanks to the quick-thinking hero cat.

“Kenny has always been an interested and curious cat and he just wouldn’t let it go and thank God he didn’t.”

“He just jumped up and down on him. He really wanted to make sure Chris got up and got down to the kitchen.”

Kenny was given a commendation award by the animal charity PDSA, which honors pets who show bravery in the face of challenges or crises.