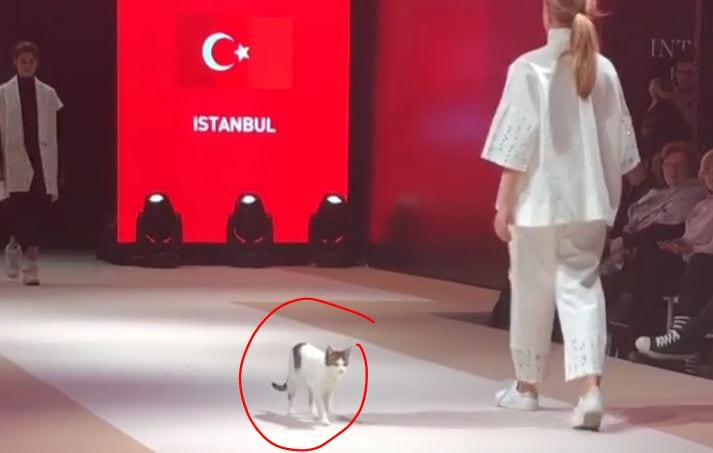 There’s a reason it’s called a catwalk and this is one fashion cat that proves it.

A catwalk by definition

And gives the word origin and history for the term catwalk as first noted in 1885 and describing it as:

“long, narrow footway,” from cat (n.) + walk (n.); in reference to such narrowness of passage one hasto cross carefully, as a cat walks. Originally of ships and theatrical back-stages. Application to fashion showrunways is by 1942.

One cool cat under pressure

Seems there is one cat that doesn’t need to know the definition in order to act it out to the fullest.

A cat made itself extremely comfortable right in the middle of the runway during a fashion show in Turkey. The cat is first seen in the video lounging, then taking a bit of  bath, oblivious to the models who continue their work as if this were an every day occurrence. The audience is tickled, particularly when the cat decides to take a swipe at a passing ensemble.  To the cat, it must have appeared nothing less than a giant cat toy.

Not to be outdone

What was already amusing because more so when the cat decides to strut its stuff alongside the models.  Exhibiting the same sultry expression and movement, it makes its way down the catwalk for all to see.  Just in case anyone missed it in the first place. What makes the spectacle even more intriguing is the cat is garbed in the same color palate as the collection.

hknylcn, self described as a Creative Director, posted it on Instagrm, referring to the kitty as “Cat Moss.” Comments included one that stated “Real cat walk….amazing.”

That about sums it up.