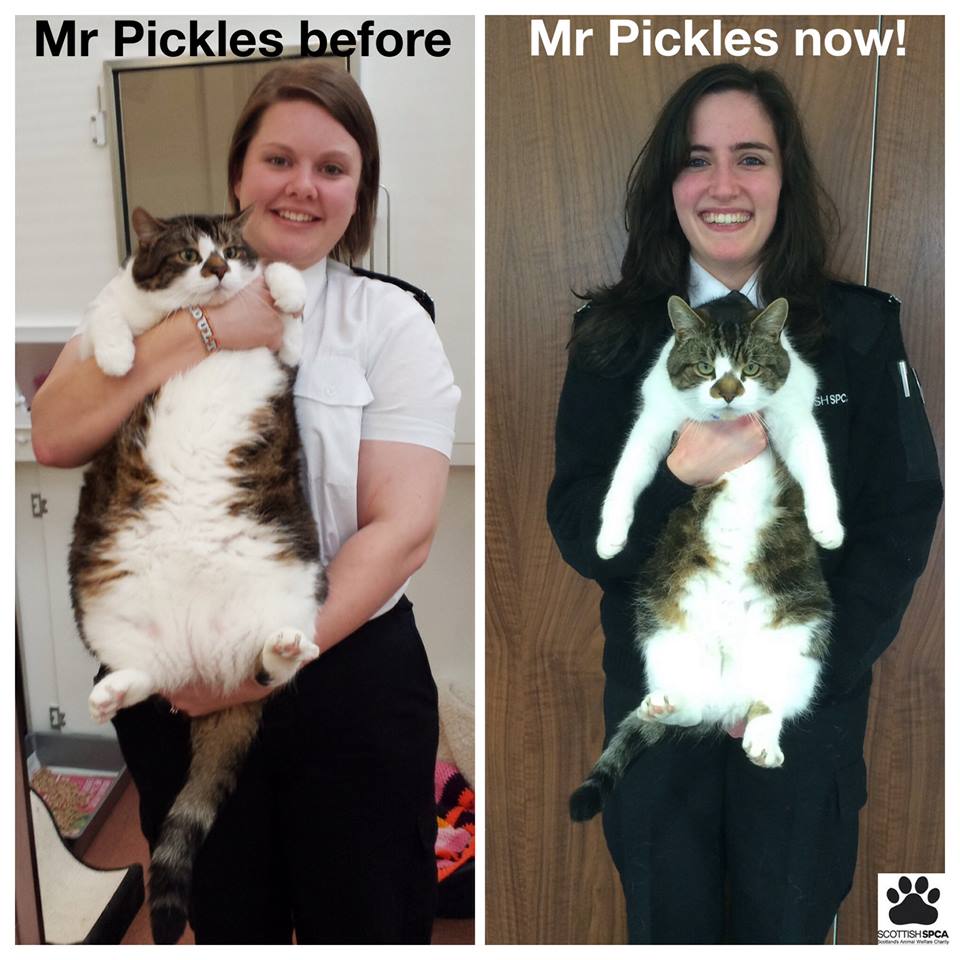 .
Fat cat reaches goal weight and gets his forever home with the friends who helped him achieve that successful transformation

An obese cat rescued in the summer of 2013 has lost almost half his body weight thanks to his caregivers at the Scottish SPCA.

More fat and extremely obese cats than ever seem to be ending up at shelters in recent years, and quite often their stories make the news. While their caregivers do their best to help these unfortunate cats slim down and regain their health, some do not survive for long, due to the health issues that often accompany obesity. We are always happy to report on the weight loss success stories, and Mr. Pickles is along them.

Mr Pickles arrived at the Scottish SPCA’s Aberdeenshire centre in Drumoak, Scotland in July 2013 after being found as a stray weighing an enormous 26 and a half pounds (12kgs).

Staff at the Drumoak-based centre put the portly Mr Pickles on a strict diet and exercise regime to help him slim down to a much more healthy weight of slightly less than 14 and a half pounds (6.5kgs).

“He has been spending a lot of time out of the cattery and in our staff room to help him get a bit more exercise.

“His slimming was always going to be very gradual as losing too much weight too quickly could have caused serious health problems.

“Mr Pickles has been at the centre for over a year now and has become something of a local celebrity. His fan club often pop in just to see him and get a cuddle.

“Children adore Mr Pickles and he really is one of the friendliest cats we’ve ever meMr Pickles aftert.

“We’ve decided that he’ll stay with us as the centre cat as he is so at home here.

“Everyone has totally fallen in love with Mr Pickles so we’re all really glad he’s sticking around.”

Debbie hopes Mr Pickles’ story will act as a warning to people who over-feed their pets. She said, “Sadly, cats diagnosed as being clinically obese can have a shorter life expectancy.

“They also have an increased risk of developing diabetes, liver problems, breathing difficulties and joint stress.

“It’s extremely important owners keep their cats at a healthy weight. Anyone concerned that their pet may be overweight should consult their vet.”

The Scottish SPCA shared Mr. Pickles’ big news at Facebook,  telling how he’d made his weight loss goal and will have a permanent home with his friends at the shelter. The post finishes off saying: “Everyone is really chuffed he’s sticking around as they all love him to pieces.” 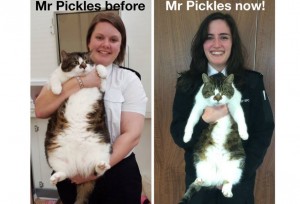