Toad was saved when a passerby heard meowing by a river at night and called the RSPCA. Officer Jane folly donned her drysuit and braved the cold, wet  darkness to rescue the cat, who was half in the water and clinging to a reed clump. 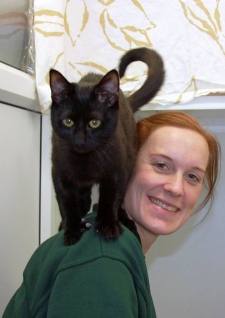 A passerby heard faint cries coming across the River Ouse in Huntingdon, UK on the evening of January 10 and called the RSPCA. Though the night was dark and the little cat all black, the passerby was finally able to spot him after following the cries. RSPCA animal welfare officer Jane Folly responded to the call and went out into the freezing waters to make the rescue.  Ms. Folly gathered  Toad from the reed bed where he was keeping himself partly out of the water, placed him into a basket and swam back to shore. Bystanders had come to officer Folly’s aid by holding a line for her follow back to shore.

A trip to the vet determined that Toad had a broken pelvis and would not have have survived the night out in the freezing waters. The RSPCA does not know whether the six month old cat was hit by a car and propelled into the river, or whether he was thrown into it.

Toad is staying at Wood Green rehoming centre and has a family waiting for him to go to after he has his neuter surgery. A Wood Green staffer said, of the little cat who endured so much “Despite all that he has been through, Toad is full of energy and loves to play whenever he gets the chance. He is a confident, affectionate little boy who will make a wonderful addition to his new family.”