Cupid, a handsome orange tabby, has had a few rough knocks in his life. After being surrendered to a high-kill shelter in North Carolina, Cupid and three other kitties’ pictures began circulating the local rescue networks, in hopes of preventing their imminent demises.

Thankfully, Goathouse Refuge, a local no-kill rescue group, chose to save Cupid and his friends about two weeks ago. Goathouse is dedicated to saving as many cats as possible from some of the worst local shelters, many of which are ill equipped to deal with the constant flow of animals that arrive due to insufficient spaying and neutering in North Carolina.

When Cupid and the other kitties arrived, everyone was shocked at their horrid condition! They were mere shadows of the cats that had originally been surrendered to the shelter. Two of them were so damaged by abuse and neglect that they had to be put to sleep almost immediately.

Another required several rounds of de-wormer to get rid of her worm infestation. 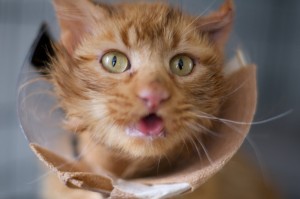 Cupid was in very bad shape too. He had a deep, infected gash in his neck that had to be cleaned and stapled back together, a badly infected ear, and he was throwing up worms and maggots!  Luckily, they got him to the emergency vet in time and this, combined with his own sheer will to survive, has placed him on the road to recovery.

Though Cupid is still continuing to physically recover in the hopes of being ready for a forever home soon, it is clear that his personality will not hold him back! He just embodies love and trust, loving to be held and literally hugging people by wrapping his paws around their neck. He gives kisses and head butts and, despite all of his pain and discomfort, he just can’t stop purring when he is around people! In addition to all of this, Cupid has the cutest little face in the world with his special little smile resulting from a cleft palate.

Now he is just waiting for a special person or family to fall in love with him!

Goathouse Refuge is a 501(c)3, non-profit, no-kill animal sanctuary dedicated to providing cage-free care for cats regardless of age, medical issues or disposition until a permanent, loving adoptive home can be found.

1 thought on “Cupid’s Story of Survival”